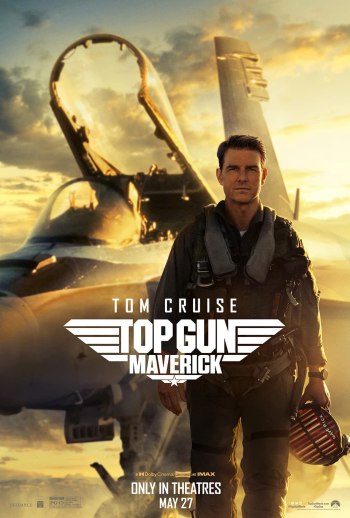 Thirty-six years ago, our lives (or those who were actually alive at the time, and of a particular age) were graced with the late Tony Scott’s Top Gun, a movie that many considered a flop before it was even made, because who would want to watch a movie about pilots? Now, in 2022, you might as well ask who wouldn’t want to watch a movie about pilots… fighter pilots, featuring insane aerobatics, a top cast and helmed by a crew of very experienced filmmakers. Top Gun is a much-beloved movie, and it’s no surprise a sequel took this long to appear. Has it been worth the wait, or should it have been “bombs away” on the very notion?

NOTE: There will be spoilers for the first movie in this review.

More than thirty years have passed since Captain Pete “Maverick” Mitchell (Cruise) graduated from the United States Navy Strike Fighter Tactics program, aka, TOPGUN. Maverick has remained at the rank of Captain due to his constant rebelliousness (but frankly, where else would Maverick really be happy?), and now serves as a test pilot. After once again defying orders during the testing of a new prototype jet, Maverick is called upon to return to TOPGUN to train the “best of the best” graduates, as the Navy plans a mission to destroy an illegal uranium plant. Maverick trains the group reluctantly, though he is drawn in personally by the inclusion of Bradley “Rooster” Bradshaw (Teller), the son of his late best friend, Nick “Goose” Bradshaw. Maverick may be the best at what he does, but even he has much to learn from the younger aviators.

It must be said that, if you enjoyed the first movie, the chance that you will enjoy this one is incredibly high. Maverick took all the best aspects of Top Gun, threw in some extra panache and, not to mention, plenty of updated flight sequences and effects, and gave us something that has one-hundred-per-cent been worth the wait. In fact, Maverick is arguably better than the first movie, and much of that has to do with the amount of time that has passed in between. It has allowed the film to be set up in a way that provides the audience with a fresh and yet familiar story (the basic plot, themes and framework don’t differ that much from the first movie), a decent amount of pathos from Maverick and a crap ton of goosebump-inducing nostalgia. Although the story mirrors the original, there’s also plenty of growth, both for familiar characters (even after all this time) and new characters (characters who may or may not be getting a spin-off movie… TBC). Maverick continues to deal with the mental and emotional fallout of losing Goose, and the consequences that impacted Goose’s family, lending much of the film’s foundation to Maverick’s own inner demons. Writers Kruger, Singer and McQuarrie did a fantastic job of refreshing Top Gun while also keeping it in the family and not allowing Maverick to become gimmicky or reduce him to a switch-and-bait appearance. He is where he belongs.

A couple of aspects of the film need particular praise. First is the insane cinematography. Claudio Miranda not only captured much of the same kind of gorgeous natural photography that Jeffrey L. Kimball managed to shoot for Top Gun, but also the intricate aerial shots, right down to the emotional close-ups, particularly in a certain meeting between Maverick and Tom “Iceman” Kazansky, with Val Kilmer returning to his iconic role. This meeting was particularly pertinent as it’s well-known that Kilmer has suffered with throat cancer and now struggles with speaking. The way this was handled by Kosinski, with his superb direction, as well as both scripturally and visually, made it a truly emotional and poignant moment. Second to mention is the soundtrack and score. We wouldn’t expect anything less than “epic” from Hans Zimmer, and he truly went to the sky and beyond with his compositions for this movie. Add on classic 80s vibes, including 80s tracks and the return of Kenny Loggins and his Danger Zone, then throw in a little-known star named LADY GAGA (who provided the excellent 80s-style tune Hold My Hand as this movie’s Take My Breath Away, as well as collaborating on the score) and you’re in for one hell of a ride indeed (seriously, download that soundtrack). I also want to mention I was gobsmacked to hear The Who’s Won’t Get Fooled Again during a mission training exercise, because I was wearing my Who t-shirt at the time.

I was sceptical about having Cruise back as Maverick in a lead role: would he be able to bring back the character we know and love? Is he – dare I say it – too old? Then I realised who I was talking about: the guy who just won’t let go of Ethan Hunt; one of very few action stars who shows no signs of backing down just yet. Cruise is still fully able to encapsulate his old character and give us everything we know about Maverick, and then some. The character is still the one we know, but still has more to show us, plus being more than capable of keeping up with the new generation. Cruise’s performance was, in a word, perfect. Also, as previously mentioned, Kilmer’s appearance as Iceman was a real lynchpin, even in the scenes where he wasn’t physically there. We also have the wonderful Connelly as Penny, an ex-flame of Maverick’s who essentially fills the same role that Kelly McGillis as Charlie filled in Top Gun, only with more potential longevity. Connelly brings her own presence to this movie however, and has great chemistry with Cruise. Then, we have Teller as Rooster. As casting goes, physically they could not have cast someone to look more like Goose’s son, probably not even Anthony Edwards’ own children. That 80s style ‘tache is EVERYTHING, and we all thank director Kosinski for blessing us with that volleyball scene. Teller’s performance is exactly what we would expect from him, with equal parts emotion, comedy and resilience, precisely what we would expect of the son of Goose. Also, like Connelly, Teller’s chemistry with Cruise (in the father-son sense, not the other sense), is fantastic, as well as reflective of Edwards and Cruise’s chemistry in the original movie. Hamm and Harris provide great ball-busting, play-by-the-rules characters that are necessary to balance out Maverick’s unpredictability, and the entire supporting cast playing the TOPGUN graduates, those training for the mission, were also wonderfully cast. The diverse casting has not gone unnoticed, particularly considering just how white the original casting was.

Maverick and all the cast and crew involved really stayed true to the roots of the Top Gun story. We’re given fresh takes on many things, such as the updated systems involved in aeronautics, including a reminder that human pilots may not be needed one day. But we are also reminded of where it all began, such as the inclusion of classic Maverick moves (look for a particular one at the very end of the movie) and the aforementioned soundtrack and cinematography. Throughout the movie I was either on the edge of my seat, holding back tears, or feeling the goosebumps all over. I was not bored for even a second, the entire two hours were entertaining, entrancing and exhausting, because you realise you haven’t been breathing properly. Top Gun: Maverick will, quite literally, take your breath away.