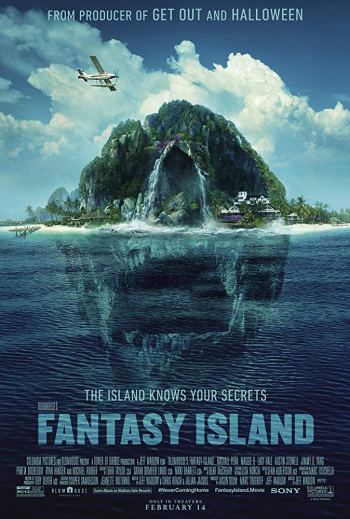 Taking classic twentieth-century television shows and revamping them as twenty-first-century blockbusters is quite a common trend. From Charlie’s Angels and The A-Team to The Man From U.N.C.L.E and 21 Jump Street, we’re not short of revivals. Fantasy Island was a ‘70s show about guests coming to an island (either by paying a ton of money or winning a contest) to live out their fantasies. The show would span many different genres, and though Wadlow’s film version is specifically horror-based, it follows the main premise and similar characters to the TV show and adds in elements of other genres. Considering the show aired for a few years in the States, it’s fair to say it must have been rather popular for a time. Does this 2020 film version manage to capture its audience in the same way, or will it leave you fantasising about being somewhere, anywhere, else?

After each winning a contest, a group of seemingly random people are brought to a tropical island known as Fantasy Island, a place where guests are invited to each act out their biggest fantasy, which can be absolutely anything they desire. The island is owned and run by Mr. Roarke (Peña), a mysterious man who nobody really knows much about. He warns the guests that although their fantasies may seem perfect, they may not all play out exactly as each would hope, suggesting that they need to truly be careful what they wish for. As each guest begins to live out their fantasy, they start to realise that not all is as it seems, and perhaps there’s more to each fantasy than meets the eye.

In theory, and perhaps even when written on paper, the premise of this movie sounds intriguing and even had a lot of potential in its initial stages of development. However, much like the fantasies of the movie’s guests, this film does not play out the way you may hope. Having been produced by Blumhouse (in conjunction with Columbia), the company that brought us the likes of Paranormal Activity, Get Out, Split and their other current (and enjoyable) release, The Invisible Man, we could be forgiven for having high expectations of Fantasy Island. Unfortunately, something seems to have gone seriously, seriously wrong, almost in irony of the final product. The story itself is chaotic, with characters that are unsure of themselves (and actors who are unsure of their characters) and plenty of plot lines that just do not make sense. At times it tries to cross horror with other genres, such as action or comedy, but it’s like Wadlow swallowed each genre then threw them all up together to create quite a stinking mess that, again, makes no sense. The dialogue itself is terrible, with some of the worst comedy and cheesiest lines ever to be uttered onscreen. Blumhouse, Jason, come on… you can do better.

If there is just one redeeming aspect of this film that enables it to be a 2-star rating rather than a 1-star, then it’s that it starts off relatively ok. The introduction to the characters and the island builds some suspense and it starts us off guessing what could happen to each guest, injecting a little fun into it. A couple of the characters show potential for story arcs that could appeal to our sympathetic and emotional sides. But that is swiftly taken away from us as the fantasies get underway, which is such a shame. It’s a very ‘The Monkey’s Paw’ type of story line for all characters, and although a couple of them, as mentioned, have plot lines and backgrounds that will elicit a little sympathy from audiences, it’s still not enough to pull it back from the depths of poor writing.

The performances are almost just as all over the place. Hale’s over-the-top, grudge-holding Melanie apparently only exists to alienate the audience further from the film; Hansen’s and Yang’s adoptive brothers J.D. and Brax are annoying, unfunny (they’re supposed to be the comic relief) and really too old to be playing characters that are apparently stuck in their early- to mid-twenties; Doubleday’s Sloane doesn’t make sense as a part of the ensemble and is used as part of a retributive and absolving storyline that is all over the place; Maggie Q’s Gwen and Stowell’s Patrick are perhaps the only two characters with proper depth that you may be able to get a little onboard with and may cling to for some semblance of sanity throughout the movie; Rooker’s Damon is weird and, frankly, unnecessary; and Peña’s Roarke is so flat for someone who is supposed to be the linchpin of the whole operation, and considering we’re used to seeing lighter performances from Peña, this kind of role just doesn’t suit him. Or at the very least the writing has let him down.

Fantasy Island is anything but – it’s laughable, messy and, above all, boring. I can’t remember the last time I wanted to walk out of a movie, but I very nearly did with this one (it’s not something I would ever actually do, because I believe all films deserve to be seen through to the end, partly out of respect to those who actually worked hard on it [god bless ‘em], and also to be able to give a proper and fair review, no matter how tough…). And, although it has been slammed overall by audiences and critics alike, it was still technically, technically, a financial hit, raking in over $40 million against a budget of $7 million. That also technically, TECHNICALLY, leaves room for a sequel. But, if Blumhouse, Wadlow and all involved have any sense, they will not come back to this franchise. Perhaps we’ll see another reboot by a different production company/director/writer in the future, but for now, it’s best to live in a fantasy where this movie does not exist.

One thought on “Fantasy Island – Review”

What’s On - April 2020 - a streaming service special while all our beloved cinemas are closed. 🎬 Full article at dawnofthetapes.com - LINK IN BIO 📝 #films #movies #streaming #netflix #primevideo #amazonprimevideo #disneyplus #nowtv #shudder #mubi #curzon #curzonhomecinema #youtube
Fantasy Island - ⭐️⭐️ - with very few redeeming features, this feature film reboot of the television show from the 70s lacks in most areas, including story and dialogue, resulting in something messy and, frankly, boring. ☠️ Full review at dawnofthetapes.com - LINK IN BIO 📝 #film #movie #review #fantasyisland #jeffwadlow #michaelpena #maggieq #lucyhale #austinstowell #jimmyoyang #ryanhansen #portiadoubleday #michaelrooker #blumhouse
Onward - ⭐️⭐️⭐️⭐️ - A heartwarming movie that deals with strong themes sensitively and carefully while retaining a lot of fun and entertainment, making it the perfect package for audiences of all ages, particularly those who may be able to relate to its subject matter. 🧙🏻 Full review at dawnofthetapes.com 📝 #film #movie #review #onward #danscanlon #tomholland #chrispratt #julialouisdreyfus #octaviaspencer #disney #pixar
The Invisible Man - ⭐️⭐️⭐️⭐️ - As horror movies go, writer/director Leigh Whannell has succeeded where many before him have not, in creating something that is successfully scary, suspenseful and thrilling without using obvious horror movie tropes, and by coming at this reboot from a fresh angle but retaining the important points of the original story. 😱 Full review at dawnofthetapes.com 📝 #film #movie #review #theinvisibleman #leighwhannell #elisabethmoss #oliverjacksoncohen #horror #hgwells
Emma. - ⭐️⭐️⭐️ - While it’s a classic Austen novel, the story of Emma has become somewhat redundant, and this latest adaptation does its best to entertain at some points but struggles overall to find its groove and be in any way relatable to modern audiences. 💖 Full review at dawnofthetapes.com 📝 #film #movie #review #Emma #autumndewilde #anyataylorjoy #johnnyflynn #miagoth #billnighy #mirandahart #janeausten
What’s On - March 2020 - a roundup of releases over the coming month. 🎬 Full article at dawnofthetapes.com 📝 #films #movies #thepaintedbird #misbehaviour #mulan #onward #aquietplace2 #vivarium