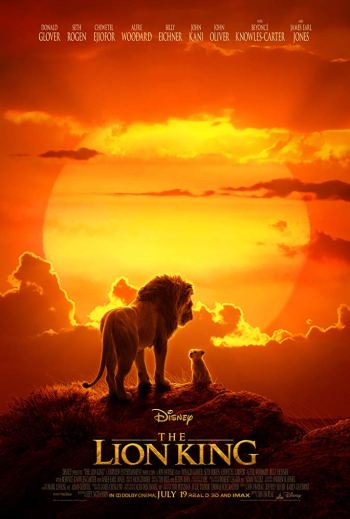 Here we are once again at the receiving end of another Disney remake (many saying “live-action”, though it’s technically not). 1994’s The Lion King animation quickly became a classic amidst the studio’s “renaissance” period and has remained so with many fans all over the world, also becoming one of the longest running, highest grossing and most popular stage shows ever. The animation is known for its award-winning songs and score, fantastic performances, emotional scenes and comic relief. A remake was, arguably, entirely unnecessary, however it’s perhaps understandable given the advancements in technology since the early 1990s and the curiosity it would have peaked in filmmakers wanting to give the animation a somewhat “realistic” makeover. But does it have the same impact that the animation did and (very much) still does?

Famously following a plot similar to that of Shakespeare’s Hamlet, The Lion King follows the story of lion cub Simba (McCrary) as he is mentored by his father Mufasa (Jones) in the ways of ruling of the Pridelands as king. Simba’s uncle Scar (Ejiofor), jealous of his brother’s position and Simba’s rights as inheritor, plots to have the father and son killed so that he may take over as ruler of Mufasa’s pride and the lands. Having failed to kill Simba and after convincing him that Mufasa’s death was the young cub’s fault, Scar pushes Simba to leave the Pridelands and never return. During his time away, Simba (Glover) grows into a fully-fledged lion under the supervision of a meerkat, Timon (Eichner), and a warthog, Pumbaa (Rogen). When he is reunited with his childhood friend Nala (Beyoncé), Simba must decide if he is ready to challenge Scar and take his rightful place as king, or if he’d rather remain in the jungle singing songs about having no worries for the rest of his life.

Obviously, the story is nothing new. We’re very familiar with The Lion King and how it plays out, so wouldn’t we expect something different in this new version, something to make it stand out a little more from its original counterpart (CGI aside)? Sure, but do we get that? Not really. The scenes and dialogue are almost like-for-like, word-for-word, and it’s all easily described in one word: bland. As extraordinary as the computer animation is (more on that in a bit), the colour palettes are nothing like what we were given in 1994. Remember the sequence for ‘I Just Can’t Wait to be King’? Remember how colourful it was? Not so much in 2019. There are a lot of browns and muted yellows and greens throughout the movie, very earthy and, yes, probably more realistic, but not particularly aesthetically pleasing. ‘Be Prepared’ was originally taken out of this version but put back in due to pressure from fans. It really should have remained out, as in the end the whole sequence felt very subdued and half-hearted and didn’t really suit this iteration of Scar, who is far more insidious and vengeful that his Jeremy Irons-voiced predecessor. The dialogue overall, despite being close to the original, doesn’t feel nearly as emotive, and although the actors do as best they can with their performances, it would potentially be more enjoyable if you were to close your eyes (rather a harsh thing to say, admittedly, due to the hard work that’s gone into the animation, but it just doesn’t marry up to the performances).

Up until now, the Disney remakes have been mostly live action, with the exception of characters that are inanimate objects (such as in Beauty and the Beast) or animals (The Jungle Book, also directed by Favreau). They all feature at least one real person. The Lion King has no such thing, thus making it entirely CGI. The biggest problem lies in attempting to make something that is really a cartoonish thing – giving animals human voices and personalities – into something “realistic”. Frankly, it just doesn’t work. Credit where credit’s due, the animals and their surroundings look fantastic – the work that’s been put into the look and movement of all creatures and their environment to make it all as real as possible just shows how far technology has come. They’re almost indistinguishable from the real thing (almost). But it does make it all the more difficult to become emotionally attached. These animals do not have mouths that move or faces that emote in the same way ours do, and so feeling sympathy or anger or any strong feelings towards them is very difficult: it really all comes down to whether or not the vocal performances are up to scratch enough in order to actually make us care for the characters.

It can’t be denied that all the actors give it their best shot, but the overall feeling is that the dialogue is either just rehashed from the original and doesn’t feel the same or it’s new yet minimal and acts more like filler than a way to flesh out characters. Scar is probably the character who’s had the most thought put into him, but even then, he’s just not as unnerving as original Scar, much in the same way Jafar in this year’s Aladdin was nowhere near as intimidating as the animated original. Again, it probably comes down to the incompatibility of realistic animals and human voices, but Scar is just not quite on the same level as he once was. Having Jones return as Mufasa was a great idea, in theory, though his voice emphasises his age and it feels like there’s less enthusiasm than when he originally voiced Mufasa. Rogen and Eichner probably benefit the most from any new dialogue, with a handful of jokes from Timon and Pumbaa just about landing, but if you’ve always felt that love for Nathan Lane and Ernie Sabella’s Timon and Pumbaa, it just feels wrong to have new voices behind the beloved characters. The songs also don’t have the same panache; quite often there’s too many added frills. Whatever happened to just singing a song in a way that means we can all sing along to it? As great as McCrary and Beyoncé are, their vocal styles make it a little harder to enjoy the songs, something that was a huge part of the original’s appeal. Perhaps it all comes down to a bias over the original movie, but why try to fix something that’s far from broken? Fair play with Beyoncé’s additional song though – it’s new and therefore audiences have no prior connection. Welcoming back Hans Zimmer and Elton John was also a good idea theoretically, but there wasn’t really much that could be added to what was already a fantastic score and wonderful songs.

Ultimately we can understand the reasons for remaking The Lion King, including utilising the updates in technology, bringing together the best aspects of all the previous films (not just the 1994 original, but the sequels and spin-offs) and the stage show, making it more culturally appropriate by hiring actors with African heritage and adding (or trying to add) new dimensions to characters. However, it just hasn’t hit the same level (not even close) that put 1994’s animation firmly on the Disney map and carved a permanent home in the hearts of so many people of all ages. To give it a two-star rating would feel harsh, but then giving it three stars feels quite generous. In this instance, it felt better to give The Lion King the benefit of the doubt with three stars, due to believing the filmmakers and cast and all involved had their hearts firmly in the right place when making this film, even if it didn’t hit the mark. The animators also deserve a lot of praise for their work, and the rating is mostly for them. Let’s hope Disney learn to leave well enough alone – just say ‘hakuna matata’ in this instance, and move on.

Dune (Part One) - ⭐️⭐️⭐️⭐️ - An excellently shot and designed adaptation of an incredibly dense novel that is sure to please many fans but possibly alienate some who are unfamiliar with Frank Herbert’s universe.
The Green Knight - ⭐️⭐️⭐️ - A safe adaptation of a centuries-old text that succeeds in bringing some fantasy into our lives but stops short of taking any risks in exploring certain themes.
Shang-Chi and the Legend of the Ten Rings - ⭐️⭐️⭐️⭐️ - A martial arts-heavy movie that works hard to balance action with story and successfully bring Asian-specific representation to the MCU.
The Suicide Squad - ⭐️⭐️⭐️ - A heroic try from James Gunn to insert something decent into the DCEU that boasts much of Gunn’s signature humour and characterisation but struggles with story and choice of characters.
Black Widow - ⭐️⭐️⭐️⭐️ - An overdue but excellently written, directed and performed solo movie for one of the MCU’s most popular and deserving characters, potentially giving Natasha Romanoff the swan song she deserves.
In the Heights - ⭐️⭐️⭐️⭐️ - A deeply thematic musical piece from Lin-Manuel Miranda, creator of Hamilton, that pulls you into a world of community struggles and relationships framed with excellently written songs and music that will salsa its way into your heart.