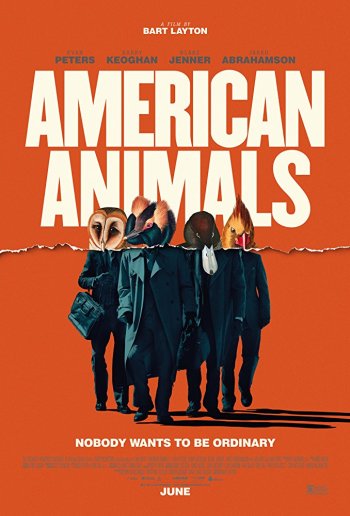 Heist movies have always been rather popular. What’s not to love about a bit of action, a bit of drama, a bit of illegality and potentially becoming disgustingly wealthy (when it comes to fiction, anyway). But, more often than not, nothing really separates one heist story from another: there’s a gang of (usually) social misfits and/or very adept individuals that get together and form a plan to steal something in order to get rich quick. If you’re going to refresh this crime sub-genre your best bet is to rethink the method in which the story is told. American Animals takes a real-life botched heist and puts a spin on the storytelling by blending reality and fiction to not only make it stand out in its genre, but to also stress the point that this film isn’t all about the heist itself. So is it successful in its endeavour, or is it just another daring escapade with little depth?

In Kentucky in 2003, students Spencer (Keoghan) and Warren (Peters) formulate a plan to rob the library of Spencer’s college after he discovers that it houses some extremely rare and valuable old books. Warren recruits two more students, loner Eric (Abrahamson) and rich boy Chas (Jenner), utilising Eric for his brains and Chas for his money and a getaway car. The foursome spend only a short amount of time on their plan before putting it into action. Narrating the true story via documentary-style interviews are the four characters’ real life counterparts, all now in their thirties, their interviews cut into the film to provide each man’s point-of-view.

The actual heist itself doesn’t scream “Hollywood movie”: there was nothing clever about the way these four students conducted themselves or planned their robbery, and overall it was an utter failure that landed each of them in jail for over seven years (not a spoiler as it is a true story). The Great Train Robbery or Mission: Impossible this ain’t. However, what the story lacks in originality it more than makes up for in format and the way the story is told. Writer/director Layton doesn’t appear to have used much, if anything, in the way of artistic license to add extra drama to the basic events of the story, but his seamless blending of interviews with the real men and the dramatisations of their deeds makes it an interesting and entertaining docu-drama for the big screen. The reason for this is to emphasise what it is the four young men learnt from their experience. The four of them were bored millennials, feeling the weight of their parents’ expectations on them to be ‘special’, and when nothing extraordinary was happening to them, they made something extraordinary happen. With their heads in the clouds they organised this heist, only for it to come crashing down around them and suffer the ensuing consequences. What’s more interesting and unique about the film is when it becomes apparent through the interviews that each man’s memory of events not only often differs from the others but also makes them wonder if what they’re remembering is their own actual version of events or if it’s something that’s been created in their minds due to hearing each other’s recounts. The overall lessons they’ve learnt is what gives the film its unique feel and independence from other heist movies: they don’t get away with it and they pay for it, both through jail time and living with the guilt of what they did and what could have happened had things gone more awry.

Perhaps it’s Layton’s experience as television-movie director that has allowed him to realise a project that could easily have become a simple documentary for television or something you’d see on a Sunday evening on ITV, but instead made it into something larger than it could have been. The students themselves were clearly influenced by movies, watching films such as The Heist and Mission: Impossible to get their ideas. Even Reservoir Dogs is directly referenced a number of times. But one movie that comes to mind whilst watching American Animals is Gus Van Sant’s 1991 My Own Private Idaho, which itself is loosely based on the experiences of young men, this time working as street hustlers. The two main characters, Mike and Scott (played by River Phoenix and Keanu Reeves, respectively), are based on two real young men who make appearances in the film, explaining some of their experiences as young male prostitutes. Van Sant’s film is less a documentary however than an artistic play on Shakespeare’s Henry IV plays with real experiences and a fictional plot intertwined, but both Van Sant and Layton blend reality and fiction in a way that gives audiences a jolt, a reminder that even fictional stories have roots that started somewhere real. There is one moment when the fourth wall is broken by Keoghan as Spencer. It could have been an asset to the film, had it occurred more than once, but instead it felt unnecessary – we already have the four real-life characters explaining their version of events, so that one rather random break from the dramatisation instead takes away from the scene being played out, as it merges into the real Spencer’s narration. It is a small criticism however, and is easily forgiven.

The lead foursome were not permitted to meet their real-life counterparts as Layton didn’t want them to become emotionally attached to them in anyway, to empathise or play them too similarly. So while most actors portraying a real figure will often study their voice and mannerisms, it’s unlikely these actors did so. As a result, Layton could not have cast better leads for the four men, as possibly using the script alone they’ve each tapped into something that represents the fundamentals of each character – this could also be in part thanks to Layton’s writing: he will have written how he wanted the characters portrayed on screen, and each of them do bear a lot of identical aspects to the real men. Barry Keoghan has some exceptional talent as an actor, his recent turns in Christopher Nolan’s Dunkirk and Yorgos Lanthimos’ The Killing of a Sacred Deer are testament to that, and American Animals is no different. His quiet, brooding and often scared Spencer is perhaps the most relatable of the four. Evan Peters is also a standout of his generation, his previous work in T.V’s American Horror Story setting him up as one to watch. His portrayal of Warren as arrogant yet terrified and ignorant is engrossing and, at times, cringe-worthy (in a good way) when things start to go wrong. Supporting the two as Eric and Chas are Jared Abrahamson and Blake Jenner, who, as characters, aren’t quite as convinced as Spencer and Warren are that the whole thing will work. With Abrahamson as the introverted but smart Eric and Jenner as the bored-with-more-to-lose Chas the four actors create a good chemistry wherein they bounce off of each other. The characters therefore are well-rounded as a group, wanting to get rich quick but not suffer the consequences of going the wrong way about it – a familiar problem in this day and age, particularly with molly-coddled young people, if ever there was one.

American Animals’ true story isn’t something you’d think a filmmaker would immediately want to pick up on unless they were likely to throw in a more fictionalised plot. However Layton has taken this story of four confused and stupid young men and turned it into a lesson. Where other heist movies show something that’s exciting and could potentially make you rich without paying many, if any, penalties for it, American Animals shows the other side, the real side, of doing such a thing. These students weren’t desperate, they weren’t starving, and they weren’t Robin Hood and his merry men, stealing from the rich to give to the poor. No, they were just bored, unstimulated and idiotic, putting their brains to use in the wrong way, hurting those around them when they didn’t mean to (while also knowing the collateral damage should it all go wrong). Add on top of that Layton’s direction and, at times, the cinematography, and you’ve got something a bit more new and interesting that takes on the heist genre within a documentary format. This film could have gone wrong in so many ways, but, unlike the heist, it was a success for Layton, his actors and his team.