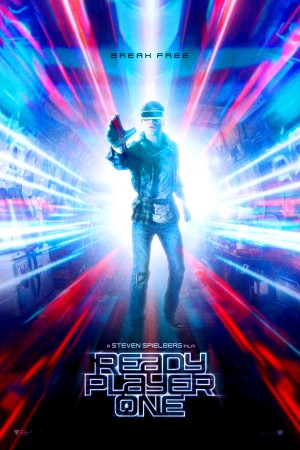 When we think of great movies from the past, say, forty years that may define the decades in which they came out, most will think of the likes of Jaws (1975), Raiders of the Lost Ark (1981), Back to the Future (1985), Jurassic Park (1993), Transformers (2007), to name a few. But what, or rather who, do they all have in common? Well, the movie master that is Steven Spielberg, of course. Whether as director or executive producer, or any other capacity, he has had his fingers in a lot of pies over the course of his extensive and varied career. Ready Player One is his latest directorial offering, the premise of which couldn’t be more up Spielberg Street if it tried. But just because it ticks all the Spielberg boxes and boasts more pop culture references than should probably be legal, is it really worth all the hype that has surrounded both film and director since trailers first started to land?

Let’s take a quick trip in a DeLorean back to 2010. Before Ernest Cline’s novel was even published, the rights to Ready Player One were bought by Warner Bros. and De Line Pictures for adaptation. Considering the story, it’s unsurprising that production houses would be quick to fight over the rights. However it does make the whole thing feel like a big money-making ploy, thanks to its constant referencing to popular films, music, books and video games that are bound to attract anyone of any age, from casual moviegoers/listeners/readers/gamers to the hardcore enthusiasts of any or all mediums.

The story follows 18-year-old Wade Watts (Sheridan), a kid who doesn’t really do much with his life in the year 2045, but spends most, if not all, of his time as his avatar Parzival in the OASIS, a virtual reality world where the majority of the population (whether it’s just the US or if it’s the whole world is unclear) spend most of their time. The world (or, again, at least the US) has become overpopulated and people now live literally on top of each other in caravan-like accommodation known as the Stacks. Upon the death of the OASIS’s creator, James Halliday (Rylance), a game is released in which three keys and clues must be discovered in order to find the location of an Easter Egg, a prize which will grant the winner control and ownership of the OASIS. As Wade becomes the front-runner in the race, he is pursued by bad guy Nolan Sorrento (Mendelsohn), the ‘bossman’ of IOI, a large game manufacturer, and Wade must rely on his knowledge of Halliday and his online friends to help him find the Easter Egg and stop it from falling into the wrong hands.

Through all of this we are constantly presented with the aforementioned pop culture references, some more obvious than others. It does make for pleasant internal squealing (lets respect the cinema space, please) when you see something you’re a fan of get a second on-screen or a quick mention just as much as something that is used almost to death. To begin listing any references here would be futile as the list would feel never-ending, so you’ll just have to watch out for them yourself should the desire to see the film take you. As joyful as it can be to see the things you love in your day-to-day life or from your past make an appearance in some form, it does ultimately feel distracting, which is possibly the intention. The story itself is not the strongest, at times getting confusing, and the characters are rather flat. There are attempts at emotional backstory for the most-featured protagonists but it all feels thrown in for the sake of making the characters more rounded. Ultimately they lack the depth of the Spielberg characters that we’re used to.

Visually, it’s a masterpiece. The work on the avatars, the OASIS and the occasional blending of reality and virtual reality is remarkable. When Wade and his cohorts are in the OASIS as their avatars the film really picks up on its action and entertainment value. Unfortunately that does mean it falls short when in the ‘real world’. If there was a way they could have gotten away with keeping the whole story within the virtual world it could have felt more endearing – somehow the avatars were more appealing than their human counterparts (which is one of the many reasons people escape to online worlds in real life). The attention to detail and the overall look of the virtual world is so enticing that at times it feels like you yourself are in a video game, which again is probably another reason it’s more interesting than the real world: anything is possible in virtual reality.

Along with the not-so-interesting scenes set in the real world come some varied performances. Tye Sheridan as Wade/Parzival struggles with what he is given. Most actors will either create a backstory for their character or have one given to them by the writer and/or director to help them get into the right mind-set, to understand their character’s actions and dialogue and ultimately create a more believable performance. It felt like Sheridan lacked the knowledge of such a backstory – Wade’s parents had died when he was a child and, without giving too much away, he is very quickly left without any family, but this is not really presented as motivation for him; he doesn’t get overly emotional about it and it’s only mentioned in voice over narration toward the beginning (of which there is a lot of expository narration in the first ten minutes, to the point where it becomes annoying and feels like lazy filmmaking) and casually later on in the film, and so his M.O remained either non-existent or just unknown for the entire film. Not so in the case of Samantha/Art3mis, played by Olivia Cooke, whose own emotional leverage blatantly motivates her, and she’s not afraid to play that out on the surface. Cooke’s performance therefore is a little more likable, even if the attempt at an American accent is not, though it’s not quite as poor as Simon Pegg’s, whose own appearances in the film are minimal and nothing to really write home about. Mendelsohn does his usual skulking as the villainous but not overly threatening Sorrento, and T.J. Miller is, as always, playing T.J. Miller. The only performance of real note is Mark Rylance as Halliday. Halliday represents a particular type of person who seeks solace online in a way that is not particularly healthy: an intelligent and creative yet lonely and painfully shy soul with a lack of interpersonal skills, someone who never felt like they had a place in the real world. Rylance endears you to Halliday and makes him probably the most relatable character in the film, something that should have been Wade’s job, but instead fell to a supporting character.

There is definitely an air of Spielberg about Ready Player One. The director certainly has his stamp on the film visually, the action sequences reminiscent of anything he’s done in the past. The story and the characters, however, just don’t quite match up to his level in the atmosphere, and so the air runs thin. You might expect to feel the emotional weight felt in the likes of E.T. or Hook, but it just doesn’t touch the heart the way those films do. The whole production would have been better in the hands of someone like James Cameron. If Spielberg generally brings the heart to his film, Cameron brings the action to his, and so the focus may have shifted more onto the physicality of the film and made it less a struggling Jurassic Park and more a successful Avatar. The pop culture referencing is all well and good (it really is rather fun to try to spot everything and get excited), but it plasters over a weak story with struggling characters. Virtual reality provides some great escapism, and Ready Player One plays heavily on that, but not enough to leave you feeling like you’ve won the game.