Now that awards season is over, perhaps there is less pressure for films to perform cirtically. Nevertheless, there are a handful out this month that will likely be really worth your time. With the odd potential blockbuster here (some new Avengers movie, apparently?) and an emotional drama there, April will still provide the cinephiles with enough to keep them satisfied, as well as your average movie-goer.

Below are three movies that could really be worth your time, along with other releases this month (all with links to trailers): 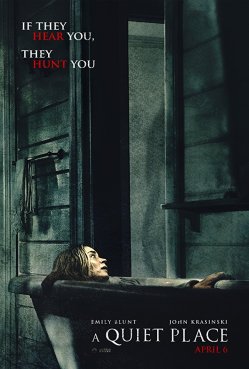 In this horror from real-life husband-and-wife duo John Krasinski and Emily Blunt, A Quiet Place sees a family trying to live their lives in total silence, lest they be attacked by unknown creatures that use sound to attack. Certainly an intriguing concept boosted by a trailer that will hook your interest, this film has already been generally well-received critically. It’ll be curious to see how they create something entertaining from what is apparently a near-dialogueless movie.

Based on the 2008 graphic novel of the same name, I Kill Giants is a fantasy story grounded in real-life trauma and dealing with the fallout. The graphic novel has quite a following and a lot of people are quite protective over the story, so there’s a lot of pressure on this production to be loyal to the source material, as with any adapted literature. With similar themes to 2017’s A Monster Calls, this will be one to watch for its emotional core alone, whether you’ve read the graphic novel or not.

Oh, yes. That Avengers movie, the one that’s been anticipated by MCU fans for what feels like a millenia. Bringing together the MCU’s most well-known faces into one behemoth of a movie, this is bound to be a financial hit, though critically it’s all to play for. Already breaking records (number of advance ticket sales), Infinity War is set to break even more. It will be a shock if it doesn’t break into the top ten grossing films of all time – Avengers Assemble and Age of Ultron are already there, at numbers 3 and 5, respectively, but Infinity War could overtake them both.