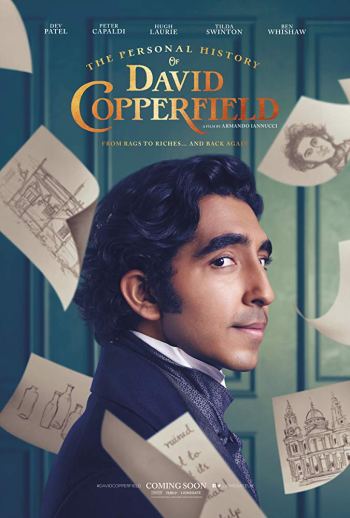 It’s been around fifty years since the last film adaptation of one of Dickens’ greatest novels. David Copperfield is often hailed as his greatest, most meaningful and personal work, and so it stands to reason that it has been adapted numerous times for different platforms (and surely to be many more… a musical, anyone?). It’s also generally well-known for being quite an emotional story, as David traverses the trials and tribulations that life has to offer, from his birth to middle age. Iannucci’s version, however, takes a more comedic approach, lightening it and reimagining it in ways that potentially make it more digestible, particularly for the more sensitive moviegoer. Has this proven to be a good approach from a writer/director known for his comedy work, or does it step too far away from the meaningful source novel?

Young David Copperfield (Varsani) is born to Clara (Clark), a young widow, and part-raised by the housekeeper, Peggotty (Cooper). When his mother remarries a horrible gentleman named Murdstone (Boyd), David is shipped off to a couple of different places before landing at a boarding school. Eventually, once he’s grown a little, and more mature and worldly David (Patel) finds himself running away from everything he knows to find his great-aunt Betsey (Swinton), who lives with her own eccentric distant relative, Mr. Dick (Laurie). David attends another boarding school and manages to work his way up in the world, but once again, as with everything, things come crashing down through no fault of his own, and David has to find a way to climb the ladder once again.

Before we get into the nitty gritty of the technical side of things, the first thing that deserves to be noticed about this film is that the casting is fully colour-blind. It’s hard to express just how refreshing it is to see a film of this nature do away with an actor’s ethnicity and cast them purely on their talent and ability to portray a character. It’s something that really shouldn’t be so note-worthy or necessary to make a point of but considering the state of the film industry at the moment, it’s something that needs to be praised and recognised when it happens. The casting is absolutely spot on and each actor is perfectly suited to their respective character (more on that in a little while). It’s a credit to Iannucci and Sarah Crowe, his casting director, that they could see beyond the norm of what usually happens with casting a film like this (with it’s British/Victorian-period setting) and prove many people wrong.

Moving into the actual style and technical side of things, this film is rather beautiful. It’s true that the story of David Copperfield isn’t the most uplifting of tales, but thanks to Iannucci’s ability to write and direct his own brand of comedy, we’re relieved of anything too dark and instead brought into Dickens’ story from a fresh angle. His humour may not enthral everyone, but it works perfectly for this kind of thing, something that’s supported, again, by excellent casting choices. For some it may prove to be too far removed from the novel, as Iannucci kind of skims over certain plot points that give the tale its peaks and troughs, all in the name of creating something that won’t allow audiences to feel too disheartened when certain events occur. It’s arguable that it feels a little patronising, but it can be mostly forgiven when Iannucci’s sharp wit rears its head.

So, yes, the casting is magnificent. Patel has always shone in his roles, and his turn as David Copperfield is no different. He’s as much Copperfield as any actor before him who has had their go at the role. His comedic timing is excellent, he’s likeable and charming, and his chemistry with every actor he shares a scene with is what every director ought to wish for. He shoulders the movie well but makes it quite clear that it really is an ensemble piece, giving everyone an equal slice of the Dickensian pie. Swinton and Laurie are a joy every time they’re onscreen, particularly at the same time, and Iannucci brings out the funny in Capaldi when his character is in the thick of it (pun intended). Whishaw easily portrays the villainous Uriah Heep with an unsettling madness that’s reminiscent of his character from Perfume.  Surrounded by an eclectic mix of veteran and fairly new comedic and dramatic talent, altogether they make for a resounding cast that really ought to pave the way for how films of any kind could and should be cast in the future.

Oftentimes, adaptations of Dickens’ work can end up being quite dreary and a little too stuck in the Victorian setting. Iannucci plays around with modern themes and language whilst sticking with gorgeous period costumes and settings, making for something that’s entertaining and modern rather than stuffy and too dialogue-heavy. As mentioned, he perhaps leaves out a little too much of what endears readers to the novel, but Iannucci has arguably made the story his own and updated it for a newer audience. Overall, The Personal History of David Copperfield is a highly entertaining piece and quite a tonic for a brief respite form the world we live in.