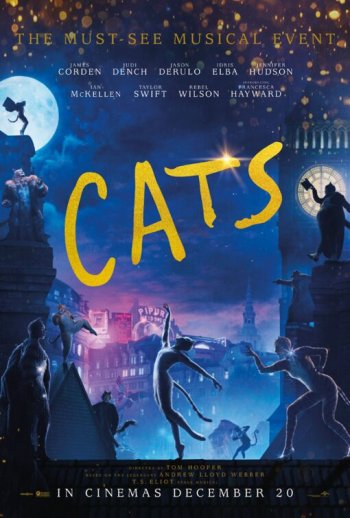 There has been much debate since the introduction and extensive use of CGI in movies, mainly surrounding audiences’ ability to suspend their disbelief if the graphics used to make something look ‘real’ doesn’t work, putting a whole new meaning to the ‘uncanny valley’ hypothesis. This controversy however has never, and will never, stop filmmakers from making use of this cheap alternative to prosthetics, animation, puppetry and machinery, for better or worse. Without CGI, we wouldn’t have this movie adaptation of Andrew Lloyd Webber’s stage musical Cats, one of the most successful shows, on both sides of the Atlantic, of all time. But, despite its success, Cats has still had its critics, and the movie has been no different in that respect. Is it really quite as bad as the vast majority of critics and audiences have reported it to be, or do the cats deserve a break?

This is a difficult movie to write about (it’s taken me about three weeks to get around to), because there is barely a good comment to be made of it. It is also being written by someone who didn’t enjoy the stage show in the first place (though, in all transparency, I’ve only seen the 1998 released recording). The trailer already advertised what can only be described as terrifying human/cat hybrid characters that make little to no sense in the human brain, and then to have to sit through almost two hours is just too much for said brain to take – it may not know whether to laugh (at, not with), cry or simply send signals to leg muscles to incite a need to run away; this is a natural fight-or-flight reaction to something that is too unsettling to stick around for without a degree of force.

IMDb describes the basic plot of Cats as “A tribe of cats called the Jellicles must decide yearly which one will ascend to the Heaviside Layer and come back to a new Jellicle life.” What IMDb has kindly provided us with is a premise to a film that lacks any real plot, much like the stage show, and is really just 110 minutes of narcissistic felines singing about themselves. This kind of works better for the stage, where live singing and dancing can be appreciated along with elaborate costumes, but not with autotuning, computer-animated half-human-half-cat creatures, and Elba somehow looking completely naked in his cat-rendered attire (when he loses the hat and coat, because, that’s what cats usually wear?). According to IMDb and Wikipedia, director Hooper wanted to do a “live-action/CGI” blend rather than the traditional animation the studio had originally been pushing for. This was not a good move, and it’s further proven so by the fact Hooper had to re-edit, with “improved visual effects”, a new version to send to cinemas. Too late, you’ve already lost your audience. It’s a shame, really, as you wouldn’t wish this kind of failure on anybody, but hopefully lessons can be learned from it. Cats is just not a good level of filmmaking. Even if the direction or cinematography or editing is there, if the main thing your audience is expected to engage with (the characters, both visually and audibly) isn’t up to scratch, everything else becomes collateral damage. Hooper is capable of so much better (The King’s Speech, The Danish Girl, Les Misérables – another stage-to-screen musical adaptation, proving he is capable of it), so he may need some time to reflect on this project before his next.

If there’s even one small redeeming feature of Cats, it’s that a few of the performances are noteworthy for the fact that the actors did what they could with what they were given. The level of talent when it comes to the dancing and singing is top notch, and there are some real A-class actors involved, but someone must have slipped them some catnip when they agreed to star in this. Hayward, a principal dancer of the Royal Ballet at Covent Garden, is certainly an excellent dancer (maybe not so talented in the singing department) in her feature film debut, but it’s not enough to get past the strange exterior of Victoria nor the cat’s promotion from just a lead dancer in the stage show to something of a protagonist, or at least audiences’ guide through the world of the Jellicle cats. As far as famous faces go, Dench finally got to play the role she was originally meant to play on stage, though not met with the same praise as Elaine Page; Elba, as mentioned, is naked and creepy; Swift makes for the strangest cat that seems to have human breasts to shake whilst singing with an odd English accent; Wilson is… Wilson, surrounded by cockroaches looking extremely weird with human faces; Hudson gets the belter ‘Memory’ and provides little else but buckets of tears; Jasooon Derulooo refrains from ever saying his own name; and then we have the outstanding meowing from Sir (actual SIR) Ian McKellen. The cast’s general lack of endorsement and promotion of this film outside of their contracted obligations speaks volumes.

Remember that scene in Alien: Resurrection, when Sigourney Weaver comes across all those Ripley/Xenomorph hybrids, and there’s one particularly gruesome-looking one lying on a bed saying, ‘kill me’? (No? Please check it out here.) Well, that’s what the weird cats with human appendages, and the whole insanity, reminded me of, something that never should have existed and should now just be allowed to die peacefully. I can’t bring myself to think of, write about or spend more time on Cats, so I’m just going to leave it there, saying that if you truly enjoyed the stage show you may get a little more out of it than wider audiences, but chances are you will be just as disappointed and horrified. We also still don’t know what the hell ‘Jellicle’ means. Best left to the imagination, perhaps, just like everything else.

One-star for the first review of 2020 on Dawn of the Tapes, the first this site has had in two years and the first one-star film I’ve personally seen since 2017’s The Bye Bye Man. Here’s hoping this year improves (it can’t get any worse, surely?).

The Green Knight - ⭐️⭐️⭐️ - A safe adaptation of a centuries-old text that succeeds in bringing some fantasy into our lives but stops short of taking any risks in exploring certain themes.
Shang-Chi and the Legend of the Ten Rings - ⭐️⭐️⭐️⭐️ - A martial arts-heavy movie that works hard to balance action with story and successfully bring Asian-specific representation to the MCU.
The Suicide Squad - ⭐️⭐️⭐️ - A heroic try from James Gunn to insert something decent into the DCEU that boasts much of Gunn’s signature humour and characterisation but struggles with story and choice of characters.
Black Widow - ⭐️⭐️⭐️⭐️ - An overdue but excellently written, directed and performed solo movie for one of the MCU’s most popular and deserving characters, potentially giving Natasha Romanoff the swan song she deserves.
In the Heights - ⭐️⭐️⭐️⭐️ - A deeply thematic musical piece from Lin-Manuel Miranda, creator of Hamilton, that pulls you into a world of community struggles and relationships framed with excellently written songs and music that will salsa its way into your heart.
The Father - ⭐️⭐️⭐️⭐️⭐️ - Florian Zeller proves himself a craftsman in his big screen directorial debut of his stage play, while Anthony Hopkins gives us one of the best performances of his career in a devastatingly beautiful portrayal of a dementia sufferer.