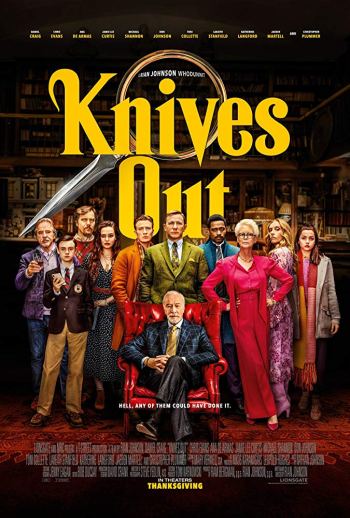 It’s always quite exciting to see an ensemble cast of well-known (usually talented, often experienced) actors come together for a big project, especially when that project is helmed by a successful and popular filmmaker. Knives Out boasts all of the above with a story that comes across in the trailer like a dialled down Clue (the American movie of the boardgame known as Cluedo in the UK). Quite a fuss was made of this movie before its release, and thanks to writer/director Johnson and the extensive cast, it’s clear to see why. But does the story, the cast and the creator come together to create something spectacular to witness, or might it be a case of too many cooks?

The Thrombey’s are a large and wealthy family, thanks to the popular books authored by the family’s patriarch, Harlan (Plumber). When Harlan dies under apparently suspicious circumstances, detective Benoit Blanc (Craig) is anonymously hired to investigate Harlan’s demise. Everyone in the family is suspected and interrogated by Blanc, as well as Harlan’s carer and companion, Marta (de Armas). As Blanc begins to get his suspicions together, the truth unravels until a final showdown, with many twists and turns along the way.

Johnson had a big job on his hands with the screenplay for Knives Out. Not only did he give himself multiple characters to round out and keep relevant, but also a plot that had to be kept under control, lest it spiral and become too confusing or, potentially worse, nonsensical. Overall, he managed to pull it off. Unlike many crime/thrillers, the plot doesn’t get out of hand. It’s relatively easy to follow, mostly thanks to de Armas’s character, Marta. She’s a strong lead who gives us the right amount of insight into everything that’s going on without the whole game being given away. Between Johnson’s writing and de Armas’s performance, we don’t stray off the beaten path. The same goes for the entire ensemble of characters: each has their own unique personality that brings something different to the Thrombeys, creating a diverse family with a familiar dynamic of head-butting and finger-pointing.

The negative side to the plot itself, however, is that while it’s simple enough to follow, it isn’t the most original, and it struggles to really get going. The first act sets everything up quite nicely, but it starts to drag as it transitions into the second act, which is slow and  dialogue-heavy. The third act picks up the pace more as it builds to the climax, where there is still more dialogue from Craig’s Blanc but, as it’s the part where the detective eventually pulls all the events together to form a cohesive theory, it provides plenty of enthralling ‘whodunnit’ super sleuthing, so it will likely grab your attention for the finale. Overall the plot is very up and down in pacing, giving us breadcrumbs to ensure we continue to follow Johnson’s story, but the steps between breadcrumbs being rather tedious at times. Throw in some entertaining characters, however, particularly Collette’s Joni or Evans’s Ransom, the black sheep of the family, and the sometimes-monotonous plot gets some much needed adrenaline to bring some life back into it. The best character has to be Marta, as (without giving anything away) her arc appears to take us in different directions when it comes to what we think we know of her, never really knowing if she is the true and honest person she says she is, or if she has a bigger role to play that could go a different way to what we might expect. She keeps us grounded within the story, and if she were a weaker character, the whole movie could easily have been a miss.

It’s a huge credit to de Armas, a relative newcomer with a handful of (successful) English-language movies under her belt, that she’s able to carry the whole movie so well, as she very much holds her own in a cast whose combined experience could be quite intimidating. It’s easy to lose yourself in Marta, with de Armas’s performance a clear standout as she keeps you hooked on her part of the story. The next best performance is probably Plumber as Harlan, a fun gentleman who we’d all love to know and would hope we would treat better than his extended family does. He’s an endearing central character played seamlessly by a talented and beloved legend. Next would probably be Craig as Benoit Blanc, mostly due to his Southern drawl, making him quite the stereotypical sleuth of the piece, but also quite fun to listen to. He has his comedic moments too, which helps to break up those previously mentioned slower moments that rear their heads at times. Collette’s Joni would probably not have been quite so pitiful and comedic were she played by anyone else. Thanks to Collette’s back-catalogue of performances, Joni stands out as an unusual pick for her, which adds to the character’s charm. Evans’s overgrown teenager, Ransom, is as out of the loop as they come, but in a way that’s entertaining and annoyingly relatable, something that perhaps only Evans could do (similarly to Collette, it’s so far from his most well-known role as Captain America that it’s refreshing to see him go a in a completely different direction). Curtis and Johnson make for quite the bickering couple, a stereotype if ever there was one, and Shannon doesn’t really provide much more than to round out the abnormal Thrombeys. Langsford and Martell don’t stand out much, but they add some much-needed youth to the film.

Knives Out is exactly what it looks to be in its trailer: a detective story with multiple suspects and a twist or two in the tale to try and keep audiences on their toes. Johnson has succeeded when it comes to his characters, with their individual story arcs and not making it feel too crowded, and keeping his story inline, but he fails to really give it that extra oomph to keep it interesting throughout, instead relying on the characters to hold the interest most of the time. It’s possible that those with a greater ability to focus will get more out of the movie than others, but otherwise it’s best to see it prepared in the knowledge that you may have to invest yourself more than usual. It’s worth sticking with it until the end and getting through any monotonous stages, even just to hear Craig’s accent continuously for about twenty minutes straight.

One thought on “Knives Out – Review”

Parasite (기생충) - ⭐️⭐️⭐️⭐️⭐️ - Another excellent picture from South Korean filmmaker Bong Joon-ho, Parasite is breaking new ground in the film industry, with its recognition at film festivals and award ceremonies all over the world, as well as bringing to light many themes surrounding social classes that are brought to life by excellent performances. 🏠 Full review at dawnofthetapes.com - LINK IN BIO 📝 #film #movie #review #parasite #bongjoonho #songkangho #choiwoosik #choyeojeong #parksodam #janghyejin #leesunkyun #parkseojoon #기생충 #봉준호 #송강호 #최우식 #조여정 #박소담 #장혜진 #이선균 #박서준
Bombshell - ⭐️⭐️⭐️⭐️ - While not the most perfect film, Bombshell does what it needs to do in shedding light on the experiences of women who suffer sexual harassment in the workplace, using a true rather than fictional story to help drive home the reality of being a woman in a “man’s” world. 🙅🏼‍♀️ Full review at dawnofthetapes.com 📝 #film #movie #review #bombshell #jayroach #charlizetheron #nicolekidman #margotrobbie #johnlithgow #megynkelly #gretchencarlson
1917 - ⭐️⭐️⭐️⭐️⭐️ - As far as war movies go, 1917 is up there with the best of them in depicting the futility and the bravery of the men who risked or laid down their lives in WW1, a stark reminder of those still putting their lives on the line today. 🇬🇧 Full review at dawnofthetapes.com 📝 #film #movie #review #1917 #1917movie #sammendes #deancharleschapman #georgemackay #colinfirth #andrewscott #benedictcumberbatch
The Academy Awards 2020 Nominees & Winners - a roundup of this years nominees for Oscars. 🏆 Full article at dawnofthetapes.com 📝 #films #movies #oscars #theoscars #academyawards #theacademyawards #1917 #sammendes #fordvferrari #lemans66 #jamesmangold #onceuponatimeinhollywood #quentintarantino #marriagestory #noahbaumbach #littlewomen #gretagerwig #parasite #bongjoonho #기생충 #봉준호 #jojorabbit #taikawaititi #joker #toddphillips #theirishman #martinscorsese
The Gentlemen - ⭐️⭐️⭐️⭐️ - Guy Ritchie gets back to what he does best (not magic carpets) and delivers a crime caper that has spots of differences to his previous similar movies to keep it fresh, though he lets himself down at times by still allowing some questionable race comments slide in, something he now needs to step away from in his crime-genre movies. 🍺 Full review at dawnofthetapes.com 📝 #film #review #movie #thegentlemen #guyritchie #matthewmcconaughey #charliehunnam #michelledockery #hughgrant #colinfarrell #henrygolding
Cats - ⭐️ - In a fine example of when ideas go wrong, Cats is not the vision it could have been had it been executed through a different and more digestible medium, such as animation or 100% digitised. There were few elements with potential for success, but ultimately let down by poor (and downright scary) visuals. 🐱 Full review at dawnofthetapes.com 🎬 #film #movies #review #cats #catsmovie #tomhooper #francescahayward #idriselba #judidench #ianmckellen #taylorswift #rebelwilson #jasonderulo