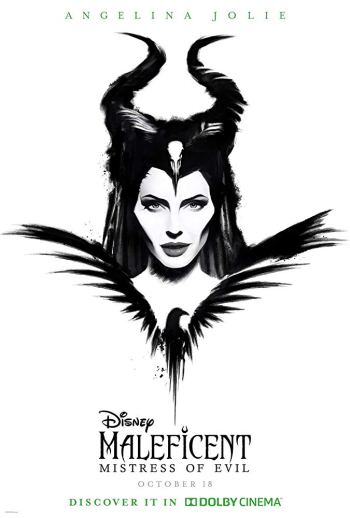 One of the best things about the first Maleficent movie is that, rather than retelling a well-known tale and purely remaking a beloved Disney animation into a live-action film, it’s all done through the eyes of the villain of the piece. As society moves closer to becoming more understanding of those more troubled than others and figuring out a cause rather than a cure, choosing this angle over the stereotypical hero(ine)’s is something of a breath of fresh air. After the success of Maleficent, it was only natural a sequel was going to pop up at some point, but does Mistress of Evil (MoE) stand in good stead compared to its predecessor, or is it another one of those very unnecessary sequels?

Five years after the events of Maleficent, Aurora (Fanning) has been made Queen of the Moors by her godmother, Maleficent (Jolie). When Prince Philip (Dickinson) proposes to Aurora, Maleficent is initially upset, but she agrees to meet Philips parents, King John (Lindsay) and Queen Ingrith (Pfeiffer). After plenty of sly digs, some provocation and upon learning that Queen Ingrith intends to have Philip and Aurora live at their castle in Ulstead (a kingdom that still fears Maleficent and creatures from the Moors), Maleficent takes off in a fit of rage, vowing that the marriage will not go ahead. It’s then that King John collapses, apparently cursed by Maleficent. Aurora, torn between her loyalty to her godmother and her love for Philip, remains at the castle, but she eventually comes to discover that not all is as it seems in Ulstead. Maleficent, meanwhile, makes an important discovery about where she comes from, and between her and Aurora, they must find a way to reconcile the two kingdoms if everyone is to live happily ever after.

The one similarity between MoE and Maleficent is that both stories are relatively unique, bringing something new to the Sleeping Beauty table (bed?). Where they differ most is that Maleficent had the basic structure of the Sleeping Beauty story to build on, whereas MoE has to stand on its own two feet. Unfortunately, MoE has the balance of a one-year-old learning to walk. The story is all over the place and nothing gels properly. Aurora’s adventures with Philip and the Moor folk are like a separate movie to Maleficent’s own journey of discovering there are others like her, and when they finally come back together something feels off, as though the story has just gone too far away from its centre, veering in too many directions, and blighted with too many themes stacked on top of each other. At some points it’s easy to forget whose story this is supposed to be (at one point, when Maleficent pops up again after a while, it was a bit like, ‘oh yeah, forgot you were in this’). There’s not really anywhere left for Maleficent to go as an antagonist: her reasoning for going all ‘evil’ has essentially passed, so the writers were really clutching at straws to get her to be the ‘Mistress of (all) Evil’ again (not that she really was in the first place, five years ago).

Of course, as with any fantasy film, there’s plenty of CGI going on, but it’s to the point that it starts to become a distraction. Aspects such as Maleficent flying or creating the beauty of the Moors is quite delightful, but when the entire world becomes one big computer-generated scene, it can make it more difficult to become immersed. In addition, about thirty-per-cent of the movie is set in darkness, and it makes it difficult to see some of the action (no allowances made for the fact it’s set in a medieval period without electricity), which is of course very off-putting. Considering the amount the previous movie made, it would be fair to assume the budget for this movie was pretty hefty, and although CGI is supposed to be cheaper than hand-crafted VFX, in this instance it would have benefitted the movie to have something more tangible onscreen. There’s only so much you can expect of your audience with a digitally heavy movie.

Jolie made Maleficent a spectacular presence in the first movie, bringing depth and a strange but invigorating grace to the character previously only known as a pure antagonist, but as hard as she tries in MoE, she can’t reach the same levels she’d already set. Although still mesmerising to look at, her dialogue amounts to random lines to shout in annoyance or quiet questions posed purely for exposition. She can’t be blamed, though: if the writing and characterisation isn’t there then there’s only so much she can do. It truly is an utter shame, a waste of a fantastic performer. Fanning is in a similar predicament, a wonderful actress in a role that has become below her, frankly. She could get away with Aurora’s innocence and naivety in Maleficent, but not now she’s supposed to be five years older. Lindsay, a comedy veteran, is thoroughly underused, Pfeiffer is cringey in a role that she’s essentially played before but to far better standards (Lamia in 2007’s Stardust), and Dickinson is as wooden as a plank in the supposed-to-be-charming Prince Philip. Riley imbues the charm Dickinson should have and is deft at injecting some comedy into his scenes, replicating his first go as Diaval and bringing a sense of relief whenever he appears. Skrein is not quite the badass we’re used to seeing him as (more of a cringey version of previous onscreen personas) when it comes to his role as Borra, a Dark Fey (Maleficent’s race), and really Ejiofer is barely there to make a fair judgment on his performance or character. Perhaps the only characters worthy of note are Pinto and Button, a cute little hedgehog-type thing and a mushroom-looking creature. Both are utterly adorable and are pretty much scene stealers.

Any charm or wonderment that Maleficent had is lost in its sequel, which is disappointing considering the first movie so easily sweeps its audience away to a fantasy world with a plot that ebbs and flows accordingly. Mistress of Evil is a few different plot ideas stitched together to create a confused patched quilt of a movie. It is absolutely a sequel for sequel’s sake; as much as there probably was a desire to see Maleficent in a movie again, it would have been more than ok to move her away from the ‘evil’ tag and to have seen perhaps just the story arc of discovering her roots (the ‘root of all evil’, if you will). The story just doesn’t live up to expectations, and on the very slight chance there is a third movie, we can only hope it takes another direction that doesn’t continue to rely on Maleficent’s misgivings and wrongdoings.