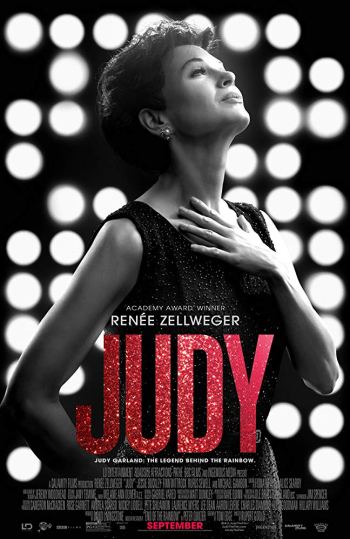 The Wizard of Oz is, without a doubt, an absolute classic and a landmark in cinema, with its popular musical numbers, instantly recognisable characters and that transition from black and white to colour, which meant so much more than just a technological advancement. But what of its lead star, the young teenager Judy Garland? Her name, just as recognisable as her character of Dorothy, is still known by people all over the world, but how much do we know about what went on behind the scenes, both then and for the rest of her life? Judy gives us a glimpse into her early career at MGM Studios and the last few months of the Hollywood legend’s life, but is it something we really need to know about, or should her private life have remained so? And having delved so deeply into her story, does it do her justice?

In 1968, Judy Garland (Zellweger) is on the verge of being destitute. She’s homeless and jumping from hotel to hotel with her two teenage children, Lorna (Ramsey) and Joey (Lloyd). She’s offered a contract to perform for a few months in London, an offer she is very reluctant to take due to not wishing to leave her children, who now live with their father, Sidney Luft (Sewell), supposedly temporarily. Judy eventually concedes, knowing she must leave her children in order to make money that will allow her to be with them in the long term. Due mostly to her near-life-long substance abuse and drinking problems, Judy’s performances range from stunning and audience-pleasing to erratic and disappointing. Through flashbacks we are shown events from Judy’s teenage years that led to her becoming unreliable and even uninsurable, with the likes of Louis B. Mayer (Richard Cordery) and the people she’s surrounded with forcing her to use drugs to get her energy levels up or down depending on what they needed from her, telling her how lucky she is to be where she is despite her looks, and how her relationship with her audiences meant she could receive the love she had always wanted and needed in her life.

It’s always been one of those classic stories of old (and modern, really) Hollywood, in which the treatment of its stars, particularly women and children, was horrendous to the point of going against their basic human rights. This was no different for Judy Garland, whose own sad story has been well-known for many years. The way in which this is shown by Goold through Judy is both shocking and yet unsurprising, in that although it’s something we know about, we don’t truly know the depth of it or the real effect it had on someone like Judy until it’s put in front of us to experience, and experience it we do. Based on the stage show, End of the Rainbow, by Peter Quilter, Judy takes us to some of the most prominent and dark points in her life that give us everything we need in order to understand more of what was happening to her, both mentally and physically, and why. The film does not hold back or shy away from the awful things done to her, and it’s entirely necessary. Did Goold and writer Edge need to take us to such personal depths in Judy’s life? Yes. Why? Because how else can change come about? How else can people be treated better unless uproar is created from the terrible experiences of others? That’s not to say that Judy will create uproar, as this has already been the case for many years (and is still ongoing), but it will keep the conversation alive. And now, thanks to films such as Judy, it’s become part of her enduring legacy, if not the best thing to come of her short but beloved and significant career.

Although it may not seem like Judy has much to offer in the way of production design, the attention to detail on the 1930s/40s MGM sets (particularly The Wizard of Oz) and the gorgeous staging of her Talk of the Town show in London (not to mention the representation of 1960s London) is magnificent. It also has a huge part to play in the film, in which the character of Judy (miles apart from her real name and persona of Ethel Gumm) belongs with these ‘sets’; it’s through these that she becomes who she is as a performer and her relationship with her audience is keenly felt. It exists to bolster the fact that she loved to perform, the lights and music and colours being the shining beacons in the darkness of her life, because she knew she would get that love and adoration that she rarely, if ever, got from anyone she personally knew. All except for her children, with her love and fierce loyalty for them also coming across as passionately as her performances (arguably, she’d put on a performance for her children every day in order to keep them from knowing the true extent of their dire circumstances).

Zellweger’s overall performance is excellent, there’s no doubt about that, however there were times when the character came across more as Zellweger performing as Judy rather than us seeing no-one but Judy onscreen. It’s difficult to play such a legendary character, particularly someone so unique and well-known for specific things, such as her voice and her wit and even her fashion sense and style. Zellweger could easily have been playing any Hollywood starlet hitting rock bottom and trying to make ends meet, but that also says a lot about her commitment to her performance. She successfully stirs emotion in us that will make us pity Judy at times, but also see the strength and resilience within her. Although she passed at the relatively young age of forty-seven, if it weren’t for Judy’s inner power and, frankly, her children, she could have gone much earlier. She fought her demons very hard, and Zellweger perfectly embodies those inner struggles and that desperate need to find love from somewhere, anywhere.  All other supporting performances are like satellites (the likes of the excellent Buckley as Judy’s London assistant and Sewell as ex-husband Sidney) around Zellweger, pulled in and held by her immense gravity, adding something here or there, but, ultimately, it’s Zellweger that keeps us immersed in Judy’s world.

As biopics go, particularly those about tragic celebrities and performers, Judy is up there with the grittiest and most open-hearted of all. At times it’s painful to watch, hard to imagine that an adult, let alone a child, could possibly be put through such things by other human beings. But it also has so much heart in it when we see the person Judy could be when she was briefly happy, particularly when performing. The film certainly does her justice, telling her story in a way that enforces how talented she was but also how hard her life had been, with much of it caused by others who were supposed to be her guardians. It’s important in realising the impact money and power can have on an individual’s life, particularly someone so talented that they’re only seen as a commodity, something to be bought and sold. It’s a tragic but imperative tale, and one that has come at the right time, when people are starting to stand up to those who take advantage. Judy’s memory and her legacy will continue to live on for many, many decades to come, and for more than just her talents as a performer, as this movie goes to show.

One thought on “Judy – Review”