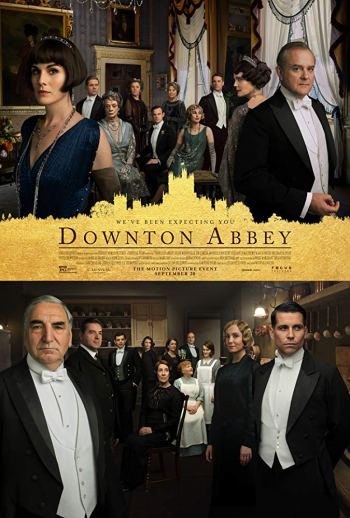 The Downton Abbey television show, which ran from 2010 to 2015, wasn’t everyone’s cup of Earl Grey. The classic upstairs/downstairs class division theme, with its ‘highborn’ characters being so uppity yet droll, wasn’t particularly pleasing to some. However, it clearly struck a chord with enough people to warrant a feature length film, most likely to those fascinated by the English upper-class and those across the pond in the US (where the production was supported by and aired on PBS). Created and written by Julian Fellowes, the majority of audiences likely related more to his strong and often compelling lower-class characters and their lives whilst enjoying the somewhat tongue-in-cheek dialogue and ‘how the other half live(d)’ environment of the Crawley family. But what we usually get from a movie that’s based on or a continuation of a T.V. show is nothing more than an extended episode, which can be disappointing for audiences wanting something more, particularly when it comes to visuals (or else what’s the point in going to the big screen?) and character development. Was Downton Abbey worth the big screen treatment, or would it have been better off as a small-screen special?

(WARNING: there may follow some spoilers for the show, so if you haven’t seen it and wish to, come back after a good binge.)

Set just two years after the conclusion of the television series, it’s 1927 and the Crawley family of Downton Abbey receive word from Buckingham Palace that King George V (Jones) and Queen Mary (James) will be coming to stay for one night during their tour of Yorkshire. While Robert Crawley, the Earl of Grantham (Bonneville), and his family are mostly thrilled, the Abbey’s staff hurry to prepare the house and food. Upon the arrival of the royal household’s servants, Downton’s staff are pushed aside, leaving them feeling useless and displeased that they cannot serve the royals in their own house. Led by Anna (Froggatt), the Downton servants come up with a plan to retain Downton’s honour and prove to the King and Queen that they are just as accomplished as the royal servants. Meanwhile, Lady Mary (Dockery) is questioning the future of Downton and its place in the ever-changing world; the Dowager Countess of Grantham, Violet Crawley (Smith), is on a mission to instate Robert as the rightful heir of Lady Bagshaw (Staunton), a cousin of the Crawleys and Lady-in-Waiting to Queen Mary; Carson (Carter) is brought temporarily out of retirement by Lady Mary to lend a hand with his decades of experience as the household’s butler; and Thomas Barrow (James-Collier), Downton’s current butler, finds himself in some trouble where his hidden sexuality is concerned.

As you might tell from the above synopsis, the movie absolutely plays out just like a feature-length episode of the show (although most of the episodes ran at about an hour and a half anyway). There are many storylines weaving throughout the main plot, which is to be expected considering the amount of characters involved, and familiar ones at that. Anyone new to Downton Abbey may find it a bit too much to keep up with, but if you’ve watched the show, you’ll instantly find yourself dropped back into the lives of characters you’d previously invested so much time into. There aren’t too many references of past characters or storylines, which will make it easier on anyone watching who hasn’t seen the show, and any references that are made are quickly and easily explained. Essentially the movie really is open to anyone, however it might be easier for those familiar with the background of certain characters, as there will be a deeper understanding of certain scenes and events and their overall significance.

There’s a good amount of character development, not for all but certainly for the younger characters and the personalities in need of a good kick in the morals, or those who often received the worst luck in the television show. It does feel quite packed at times, with many of the movie’s storylines more likely to play over a handful of episodes if on television, but it also feels comfortably familiar, like coming home; we know who these characters are and we are happy to see them again. Visually, there’s not a lot to say, as there’s nothing extra grand about it, considering. Not even the involvement of the royals made it seem anymore over-the-top than we’d be used to.  In that sense, a cinematic release was probably unnecessary, but it does reflect the grandeur of the Crawley family and Downton itself: it may not have been necessary, but what about the upper class really is? They will do things because they can. They could put Downton on the big screen, and so they did. If anything, it’s nice to hear that lovely classic score, particularly the theme, filling a theatre.

Downton is such a strong ensemble piece that every actor must pull their weight, and truly they all do. Each character is just as they were in the show, each as familiar and loveable or detestable (or both simultaneously) as always, and the new characters (King George, Princess Mary, Lady Bagshaw, for example) fit in just as well. From the warmth of Robert Crawly and the kindness of his wife Cora (McGovern), to the strength of Lady Mary and the wit of the Dowager Countess, the Crawleys and their high class compatriots are everything we’d expect them to be, and we’re just as curious about them and their lives with unrelatable problems as we were when watching the show. Smith especially is wonderful in her role as the Dowager, often stealing the show, particularly when opposite Wilton as Lady Isobel Grey; and Leech’s Tom Branson is, as always, the gateway for relatability between classes, a kind and open-minded man perfectly suited to Leech’s onscreen disposition. Carter’s stalwart Carson keeps us close to the Abbey’s staff, with his endearing ways and ability to rally the troops and keep calm and carry on. The likes of McShera’s Daisy and Nicol’s Mrs Patmore are still the strong, empathetic and funny characters we’ve followed since the beginning, and it’s effortless to fall back into loving them. The same goes for Froggatt’s Anna and Coyle’s Mr Bates, a couple who went through so much on the show. It would have been a tragedy if their storylines were anything less than what they were, so it’s a credit to Fellowes that he stayed true to his most beloved characters whilst developing those that still need and deserved it.

Overall, Downton Abbey has a very simplistic plot that doesn’t steer far at all from the show that birthed it and dialogue that, while it’s familiar and true to the characters, isn’t anything particularly cerebral, which is a far cry from some of the show’s previous storylines and scriptwriting. It’s enjoyable, but nothing out of the ordinary. You could easily watch it on television and feel the same way you may feel after seeing it on the big screen. It’s wonderful to see where the characters are and where they could be going, so much so that some audiences may be all for seeing more of them in the future, particularly as times change and the higher classes have much less influence on the land and people around them. It’s absolutely worth watching if you’ve seen the show, but maybe unnecessary if you haven’t. It’s also likely to do well in the US, where the show has a strong following (certainly making it a financially viable film). For now, Downton Abbey does a great job in reviving the love and interest in the characters, giving them good stories to work with (though no more than many regular episodes have done in the past) and enough in the way of open-ended chapters to make us feel as though the characters, and Downton itself, will go on forever.