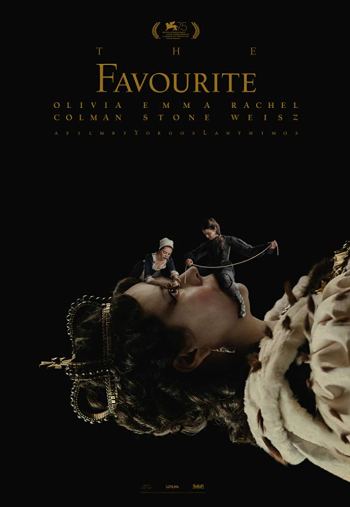 As awards season gets underway a little earlier this year, we’re starting to see a slew of films put themselves forward in the race for a nomination. One particular film that’s got the tongues of critics wagging recently is The Favourite, the latest directorial offering from critic’s darling Yorgos Lanthimos (The Lobster, The Killing of a Sacred Deer). Boasting a stellar cast, prominent female leads, an apparently very grand production budget and an actual menagerie to boot, is The Favourite going to follow through on its title and prove itself a unique frontrunner, or might it fade behind other blockbusters such as A Star Is Born and Bohemian Rhapsody?

In early 18th century England, Queen Anne (Coleman) is on the throne with declining health. Her confidant, Lady Sarah (Weisz), has been by her side for many years, their relationship as close as they come. Due to Anne’s ailments, Sarah often takes on the role of governing the country in the Queen’s stead, exerting much control over the government and the insecure and juvenile Anne herself (cue much plotting and backstabbing within the government). One day, Sarah’s cousin Abigail (Stone) arrives at the Queen’s home begging Sarah for a job after her family’s fall from aristocracy. Sarah allows Abigail to work in the kitchens, where she is often berated and abused by the staff. Not wanting to remain lowly for the rest of her life, Abigail begins to worm her way into the attention and eventual affection of Anne as Sarah becomes preoccupied with the war against France, of which her husband the Duke of Marlborough (Gatiss) is at the forefront. As war rages in mainland Europe, so does it within the Queen’s own household, the two women desperate for a life of luxury and security without the other’s presence.

The story itself is based on historical fact and evidence, however much dramatic license has been taken, of course. The relationship triangle involving Anne, Sarah and Abigail, accurate or not, is so wonderfully written by Deborah Davis and Tony McNamara that the realism of it all is by the by. In the current climate of creating great roles for women, particularly leading roles, the three within this production are exactly the sort of thing we want to be seeing right now. Each of the three lead characters has depth and pathos in one way or another and three of the most talented actors working today portraying them. As an audience we go through waves of liking and disliking each character, showing women as the wonderfully complex humans that we are. In particular, Abigail’s reaction to the attention she receives from men is quite refreshing in that she doesn’t allow herself to play second fiddle to any of them, instead using them as a means to her own ends. Even if the story surrounding Anne, Sarah and Abigail wasn’t a strong one, the characters themselves stand out far enough to warrant hardy applause.

Fortunately, the story itself is strange, enticing and entertaining all at once. Lanthimos is known for his odd stories and unique directorial vision, and The Favourite was just the perfect screenplay to land in his lap, with its odd mix of period drama and more modern comedic elements. It’s clear that he has allowed his actors to freely explore the relationships between their characters in order to become comfortable with them and each other, something that’s highly important due to the nature of some of the relationships. The theme of war that runs as an artery through the heart of the film touches every character, whether in a more obvious way (the war with France) than others (Masham’s confrontations with Abigail when it comes to their bedtime activities). Lanthimos collaborates well with cinematography Robbie Ryan to frame characters in such a way that as an audience we can feel when two characters are at war with one another or on the affectionate side. The production and costume designs are also so overtly elaborate that it only reflects the opulent desires of Sarah and Abigail and the world in which Queen Anne was born into and has lived all of her life. Overall it contributes to a plot that may have ironically fallen apart quite easily with a more controlling directorial hand. It’s also interesting to see references to Lanthimos’s previous films, with the inclusion of lobsters and references to venison (deer meat). There’s also something oddly soothing about the inclusion of rabbits and ducks too, as if it’s some sort of commentary on how animalistic the characters are at times in comparison to the tameness of the animals. Or perhaps it’s just because, well, who doesn’t like a cute rabbit or a funny duck.

As mentioned, the casting has been spot on for this production. Coleman, in her second collaboration with Lanthimos after The Lobster, is a performer who only seems to get better and better in the roles she smartly chooses. To go from Peep Show (amongst many other projects) to this only shows just how talented an actress she is, winning the Golden Globe for Best Performance by an Actress in a Motion Picture – Musical or Comedy for her role as Queen Anne (her first win as a lead but second Golden Globe overall). Truly a well-deserved win for a smashing performance. Weisz as Sarah also steps somewhat out of her comfort zone, taking over the role after Kate Winslet had to pull out. While Sarah doesn’t have quite the range that Anne does as a character, Weisz still thoroughly entertains as a character who is forthcoming and genuinely devoted, though to who or what is anyone’s guess. Then there’s Stone’s portrayal of Abigail, which is a performance that takes the audience through the motions of a woman on a mission to prove herself and not allow her position in society to define who she is. Instead she allows her actions, whether for good or bad, to do that, meaning that while giving a British accent a bloody good go, Stone is up against Coleman’s Anne when it comes to the character with the most range. Put all three together and you’ve got a main ensemble that dominates and enthrals from scene to scene. Hoult as the slippery Lord Harley is an interesting choice, perhaps not the first actor that would come to mind, but he too nails his role, his youthful looks and voice somehow making his character, a future Prime Minister before ‘Prime Minister’ was even an official role, work. Supporting three strong female leads would be difficult for any actor, but Hoult does a sturdy and noticeably good job. Special mention also goes to Horatio the duck, who must always be there no matter what Harley says.

The Favourite is Lanthimos’s third English-language feature-length film, and it’s absolutely his third success. Everything within the film comes together quite seamlessly to provide audiences with something to be thoroughly entertained by without being too bogged down by political or social commentary; though it is there and plain to see, it’s possibly one of the first films to not make a big deal of it. Certain aspects are now becoming the norm, and rightly so, without overshadowing the core story or intentions of a film. It’s little wonder there is so much talk about The Favourite when it comes to awards. Admittedly it might not be a film for everyone, commercially speaking, however if you’re unfamiliar with Lanthimos, it would be worthwhile to watch The Lobster and/or The Killing of a Sacred Deer as an appetiser, just so you can get familiar with his work and thus understand his style and the tone better. In many ways his previous films are more outlandish, entertaining and stronger overall than The Favourite, though they will be absolutely worth your time and perhaps entice you to await Lanthimos’s next project with great anticipation, whatever it may be.