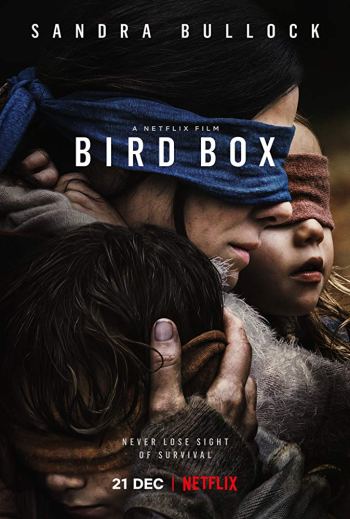 Say what you will about Netflix and its effect on film distribution and role in the potential demise of cinemas, now and again it does push out some interesting, entertaining and often critically successful releases (Okja, Annihilation, Beasts of No Nation, to name just a few) that are reachable (arguably) to a wider audience. It’s a whole other subject to get in to, and Bird Box is just another film to throw into the mix, for good or ill. After all the hype surrounding it and the dangerous stunts it has inspired, has Bird Box earnt its place as one of Netflix’s best-ever releases, or is it another Cloverfield Paradox, with all hype and no substance?

Based on Josh Malerman’s 2014 novel of the same name, Bird Box is set in what is presumably the present-day (initially). Protagonist Malorie (Bullock) finds herself pregnant and abandoned by her ex-partner. Supported by her sister Jess (Paulson), Malorie reluctantly attends hospital appointments. During this time, they see on the news that a strange phenomenon has started in Russia and Europe, in which an unknown force is causing people to commit suicide. After attending an appointment whilst heavily pregnant, Malorie and Jess witness people committing suicide after they appear to see something that causes them to do so. As chaos ensues, Malorie finds herself in a fortified house with a group of people, a stronghold within which she stays for a few years. Eventually, she and another member of the group, Tom (Rhodes), as well as a young boy and a young girl (Edwards, Blair), set out to find other survivors and a safer place, despite knowing the dangers that await them outside the house.

Bird Box, in its premise, harks back to many films for different reasons: 2018’s A Quiet Place, for the way the story plays on the senses when it comes to avoiding monsters (in this case it uses sound and hearing) and being isolated from the world; 2008’s The Happening, about a suicidal plague; 2004’s The Village, for the way in which a small community lives isolated within their town lest they come into contact with monsters on the outside (it also deals with the sense of sight); and also some Stephen King-based films, such as The Mist and, in some ways, The Shining (again with the isolation and an unseen force driving people to do things out of character). There’s really no such thing as an original idea these days, and although Bird Box shares its basic story with the aforementioned films, it somehow retains some uniqueness to it. The characters themselves are quite well defined and easy to split into likable and unlikable. This arguably means they lack depth, however in a story that involves an ensemble cast for a good portion of the film, providing all of them with the depth required to round out their character would make it far too dense. Instead, the focus often remains on those we’re guided to care for, namely Malorie and, a little later, Tom. It’s from the characters that the core uniqueness of the film stems from, which is in part thanks to the directorial talents of Susanne Bier, but much of it is down to the casting choices. Also, in the sharing of themes of isolation and avoiding the outside world, Bird Box becomes perfect for the small screen: the intimacy created through the isolation experienced by the characters in a world that has been forced into claustrophobia makes for a similar feeling when watched in a small space. This may not have worked so well on a larger screen: a lot of its enjoyment comes from feeling like you’re stuck in that house with the characters.

The themes and issues touched on are plentiful, with some more obvious than others and some probably more intentional than others, too. Religion is one of the bigger ones that umbrellas the film, with the apocalyptic setting and themes of temptation and good versus evil (perhaps even the notion of the meek inheriting the Earth, in some ways). Then there’s the issue of suicide, with mental health issues being an invisible yet overpowering force that is often inescapable and difficult to understand. And of course, due to the characters blindfolding themselves so they can’t see the force that will cause them to kill themselves, disabilities are at the forefront, something that, without giving too much away, becomes more prominent towards the end of the film. It does however start to become a little overwhelming, picking up on all these different aspects of the story, however the plot itself moves along swiftly enough to not let us as an audience get too hung up on it all. It also helps that the story moves back and forth between the start of the phenomenon and the attempt to find another place away from the house, as it keeps us intrigued as to what happens within the main bulk of the story and not dwell too much on the meaning.

Where the casting is involved, it’s not really possible to go wrong where Sandra Bullock is involved (though this obviously does not include Speed 2: Cruise Control). Not only is she able to lighten a mood where necessary, but she can sharply turn it to something more serious or darker when the situation is called for; it’s the perfect kind of performance needed for this film. Rhodes as Tom is the yin to Malorie/Bullock’s yang, balancing out each other’s characters in an almost Adam and Eve-type of situation. The ensemble cast that make up the other residents of the house aren’t overbearing either, each one playing to a unique character that is relatively memorable for one reason or another, none feeling like a pointless addition. Malkovich in particular as the divisive Douglas is excellent, providing the controversy one would expect in this kind of situation.

Though not the most original in story, Bird Box’s characters and commitment to keeping the antagonistic force as an unseen entity both work very much toward its favour. Add on top of that a creeping score by the one and only Trent Reznor and Atticus Ross, two collaborators who have won awards for their previous score work (as well as Ross eventually joining Reznor’s band, Nine Inch Nails), and you have something that does breathe some fresh life into a story containing themes that continue to be rehashed again and again in film. Netflix claims Bird Box is the most successful (in its initial seven days) than any other of their original releases. It’s easy to believe, in that it was hugely hyped up originally, but since then word-of-mouth has likely kept it going strong. It’s definitely one of the better films the streaming service has released, and it’s enough to rival the likes of A Quiet Place despite not having a cinematic release (though it did have a very limited initial run). Hype or not, it’s absolutely worth the watch, preferably in a small dark space with the curtains closed.