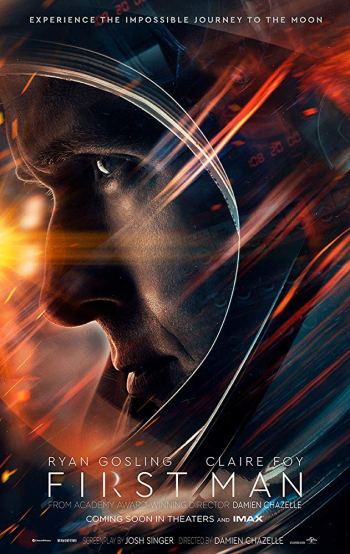 Biographical films (‘biopics’), whilst informative, can often be misleading. The need for studios to impose the importance of entertainment on filmmakers generally leads to taking dramatic license, sometimes hugely, sometimes in small ways, and creating something that is indeed entertaining (hopefully) but often too digressive from true events. First Man covers the life of American astronaut Neil Armstrong, the first man to set foot on the Moon, from 1961 to 1969, the latter being the year of the Apollo 11 Moon landing. Considering it’s based on a biography that was written with Armstrong’s blessing and the film itself was approved by Armstrong’s two sons, has Damien Chazelle been successful in his commitment to making First Man as close to the real deal as possible, both scientifically and personally, whilst keeping it entertaining, or is it a failed mission?

In 1961, Neil Armstrong (Gosling), at this point just a test pilot for NASA, has a near-miss with a test rocket. As a colleague remarks that this is Armstrong’s third mishap within a month, it comes to light that Armstrong and his family, including his patient wife Janet (Foy), have been through some tragic circumstances. In spite of this, four years on Armstrong is successfully selected to command the Gemini 8 mission. Fast forward three more years and after further tragedy during tests, Armstrong is given command of Apollo 11, the official Moon landing mission. Throughout his career leading to the lunar landing Armstrong continually deals with loss, his rightfully fretful wife and keeping his sons from worrying whether or not he’ll return home.

First Man is quite literally a world away from Chazelle’s two previous mainstream productions, 2014’s Whiplash and 2016’s La La Land, both of which he wrote and directed. Some directors are made for only one genre, perhaps two, but Chazelle is majorly proving his worth across the board. Perhaps it’s in part because he has a strong team whom he chooses to work with on more than one project, such as composer Justin Hurwitz, actor Ryan Gosling and cinematographer Linus Sandgren. Chazelle underuses Hurwitz’s talents in First Man, however it makes it all the more poignant when the orchestra comes alive. There’s no particularly dramatic music, as the story takes care of the drama and action itself without need for music; the sound effects of rocket launches and heavy breathing do more than enough to get the audience’s hearts racing. The same applies to Gosling who underperforms in a way that belies a quiet intelligence and repressed emotional streak in Armstrong. Sandgren’s cinematography captures some fully intimate moments for some of the main characters at times while alternately conveying a sense of awe in the landscapes, whether real (Earth) or fake (Moon surface). The lack of a steadicam also very much gives it a realistic feel, as though we are a part of the events. It may be due to his background with music but at times Chazelle’s abilities as a director are similar to that of a composer in the way he brings all elements together to create something visually and auditorily pleasing.

Armstrong’s life wasn’t always the most positive, and Chazelle gets this across effectively but perhaps too effectively. It’s clear he didn’t want to make a movie that just celebrates success, particularly a success that is often seen as wholly ‘American’, but at times the plot can be a little too negative for too long. Granted that this is the reality of a person’s life, and a biopic, but having to sit through too much of that for too long can cause unsuspension of disbelief, even to go so far as to pull you out of the movie briefly. Fortunately Chazelle is capable of pulling you back in and getting back on track in the same way NASA bounced back after each failed test. Sometimes it has the grand scope of 2013’s Gravity whilst also being extremely realistically claustrophobic, and at other times certain features might make you think of something less obvious. Films like Disney’s lesser known 1997 comedy Rocketman, or, dare it be said, Nick Park’s 1989 stop-motion animation short A Grand Day Out, featuring Wallace and Gromit and their trip to the Moon actually come to mind. Considering the gloomy tone that encompasses much of the film it’s nice to be reminded of something more lighthearted. It also may make you thankful that they don’t go too overboard on the science and physics, as that would be a sure way to turn off your average audience. The basics are there when necessary, and the film is pretty damn accurate for the most part, down to the angle of the Sun on the Moon, but it doesn’t hurt your head in the way your science teacher may have done in school.

Although Armstrong was of course a real person, Chazelle worked together with Gosling to create a highly believable character. To understand the man behind one of the most famous events in history is quite necessary in order to ground the legend. The Moon landing often seems like a story of fairytale proportions, but Armstrong’s personal story brings it all very much back down to Earth. Following interviews with family and literature used for research, Chazelle’s plot revolving around events in Armstrong’s life and their effects on him and his family are also kept grounded and not overdramatised, very much utilising the stigma of the day (that still exists today) surrounding men showing their emotions. So too is the political atmosphere that surrounds the event, such as people protesting against spending money on going to space rather than on the people and JFK staunchly defending the decision. It properly frames Neil’s experiences and the main event itself.

As mentioned, Gosling does very much underperform in this, which at first gives us a sense of Armstrong as a person but soon becomes monotonous. Gosling has more than proven himself in a number of films, including La La Land with Chazelle, so it’s not like we don’t know what he’s capable of. There were many chances in which Chazelle could have switched Gosling up a bit and brought Armstrong out of his shell a little more. Whether or not it would be in keeping with the real man is probably debatable but might have made for more variation and overall enjoyment. That’s not to say Gosling is not excellent with the material he’s given, as he very much is, Chazelle just could have utilised him more diversely. Claire Foy on the other hand is her usual fabulous self. Like Gosling she has more than proven herself in previous projects, but as Janet Armstrong she exposes many levels where Gosling/Neil keeps his hidden. Foy already appears to be the subject of Academy Award rumours, which would be unsurprising – this whole film is perfect Oscar-bait. Supporting performances are also strong from a host of veteran actors, creating an overall ensemble that reflects the teamwork it took to get three men to the Moon in the first place.

Not sticking to what he knows best (musicals) and yet making the most of what he does (directing) was a good move from Chazelle. Not only are we given a film that is engrossing and thought-provoking, if a little long and monotonous in tone at times, but also a piece of history that is little-known by most people presented in a well-written and well thought-out way. It is an entertaining production overall, one that carries a message of hope for the future from the past. It’s a stark reminder of what we’re capable of as human beings, not just physically but personally and mentally, the things we can deal with and survive. And as success goes for Chazelle, the Eagle has well and truly landed.