Does the name ‘Drew Goddard’ ring any bells? Because it should. Although not on the same level of recognition (yet) as the likes of Tarantino or Scorsese, Goddard’s fingerprints are all over a few popular films of the past decade (Cloverfield, World War Z and The Martian) thanks to his skills as a writer (and occasional producer). He’s dipped his toe into television, lending a hand to the likes of Buffy the Vampire Slayer, its spin-off Angel and working again with J.J. Abrams after Cloverfield on Lost. Goddard’s only feature film directorial credit other than Bad Times is 2012’s The Cabin in the Woods, which he also co-wrote with Buffy and Angel creator Joss Whedon. What all these projects have in common, if nothing else, is quality writing. Goddard has set himself up as someone worth studio money, a filmmaker worthy of investment. But is Bad Times at the El Royale proof that such an investment was worth the money?

One night in 1969 four guests separately check in to the El Royale, a hotel that straddles the state line between California and Nevada, each with his or her own agenda: Father Daniel Flynn (Bridges), a priest suffering from early on-set Alzheimers/dementia; Darlene Sweet (Erivo), a very talented yet struggling singer; Laramie Seymour Sullivan (Hamm), a travelling salesman; and Emily Summerspring (Johnson), a disgruntled and very private hippy. They are welcomed by Miles (Pullman), the only staff member at the El Royale. They each select and take to a room where they engage in their own private affairs, unbeknownst to them that someone could be watching. As events unfold, their fates start to intertwine until all hell breaks loose.

Categorised as a mystery-thriller, Bad Times keeps you guessing as the characters’ stories are told and built upon, which it does quite successfully and not to the point where it drags things out in order to push the run time (more on that 141-minute run time in a bit). Now and again there will even be a jump-scare of sorts that is done a hundred times better than in ninety-per-cent of horrors and/or thrillers. Goddard’s influences clearly stem from the film-noirs of the 1960s, something that’s particularly palpable in the film’s overall tone and aesthetic, but he adds something more Tarantino-esque to the proceedings that make it feel modern despite its 60’s setting. The way in which the background of each character is explored through chapter-like segments, and, to an extent, the violence, is reminiscent of Kill Bill, and the way it shifts midway and starts to feel like a related yet different film harks back to From Dusk Till Dawn. Goddard is much more reigned-in than Tarantino though, thankfully, allowing his story to take precedence over the action and visuals. On top of all this the political themes that run through the entire film reflect the general feel of America in the late 1960s. Without giving anything away, Goddard deftly refers to scandals and war in a way that influences the story and characters, expertly interweaving a subplot that is contextually applicable.

Goddard has really honed his writing skills on Bad Times. In Cloverfield we got a sense of his ability to write a thriller, and through The Martian we came to know that the man is intelligent, or at least very capable of research, and can give each line of dialogue meaning, and in The Cabin in the Woods he can lead us smoothly through twists and turns with no confusion. If he hadn’t also directed, the film could have easily lost its way and become messy. There are many times where Bad Times had the potential to veer off, but luckily Goddard very much had his hands on the reigns. His cinematographer Seamus McGarvey creates very alluring visuals, some of the scene setups and shots becoming almost theatrical, as though you’re watching a stage play, in a similar way to Hitchcock’s 1948 mystery film Rope. As for that run time, it can seem overly long, and many people have made that their main criticism for the film, however the length isn’t the issue, it’s the pacing. Goddard has plenty of story to keep it interesting and a strong enough plot to keep the film moving, however if he had shortened a handful of scenes (such as a couple of Darlene’s singing scenes or scenes between two characters getting to know one another) it could have knocked ten, maybe fifteen minutes off. Arguably these scenes contain important dialogue that help to build character relationships before the payoff, helping the audience to invest and laying the groundwork for what comes later, but sometimes less is truly more and, as mentioned, a handful of scenes could have been edited via the script and still been just as poignant.

As talented as Goddard and McGarvey are in creating the skeleton of the film, the cast make up the muscle and layers that bring Goddard’s script to life. Jeff Bridges as Father Flynn (couldn’t help but think of his character from Tron each time that name was mentioned) was spot on, certainly the easiest character to emotionally invest in and whose story you’d want to get back to when we’re pulled away to another character. Hamm’s character of Laramie is similar, as we come to know his story we just want to know more and how it’s going to play out. Johnson’s character of Emily isn’t the best female character ever written, but she has her bad-ass moments, and Johnson’s ability to play a bad-ass comes through. Easily the standout of the main four however is relative newcomer Cynthia Erivo as Darlene. Her singing voice is indeed stunning (and recorded live, which is always a positive aspect) but her ability to switch up emotions as and when needed for Darlene is a skill many actors are never able to fully master. Just like Bridges, Erivo will draw you in and not let you out until it’s over. At times she becomes the very heart and soul of the film, something particularly noticeable against Hemsworth’s bad guy, Billy Lee. Reuniting with Goddard since he starred in The Cabin in the Woods, Hemsworth sheds Thor’s cape and undertakes something a little different than we’re used to from him, which is always refreshing to see from actors who are often typecast. Yes, he once again has his shirt off to a near-unnecessary degree, but you won’t get many complaints about that here. He does well as a Manson-esque cult leader, even with a Cavill-like moustache. Lewis Pullman (offspring of Bill) is also enticing as Miles, a character with a heavy history and a lot on his mind. Pullman shows a hell of a lot of promise in Bad Times, and it would be good to see him lead a larger film in the future.

Although not quite one-hundred per-cent perfect, Bad Times at the El Royale is a strong offering from Drew Goddard. The plot is sound, the script is strong and the mise-en-scéne creates a world that’s easy to get lost in, even if it’s a world you wouldn’t actually want to find yourself getting lost in. You may find yourself glancing at your watch towards the two-hour mark, but overall it’s completely worth the watch. In terms of filmmaking it’s an incredibly strong production, certainly one of the top films of 2018. Knowing that having the wrong director or the wrong actor for a certain part could have brought the whole production tumbling down (or at least to a three-star rating) is a dangerous line to toe, but with it being Goddard’s passion project it’s easy to feel the commitment from the cast and crew alike. A greatly entertaining film that sets Goddard up as one to watch in the very near future.

Also, how awesome are the marketing posters (particularly Chris Hemsworth’s)?! 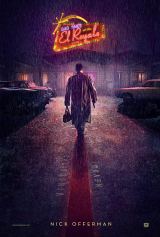 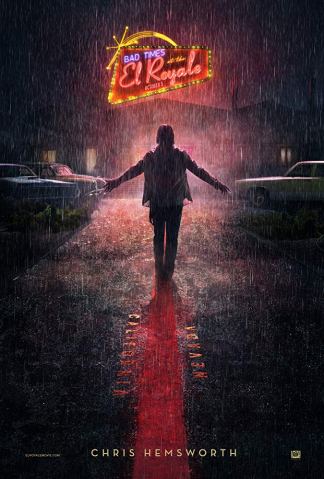