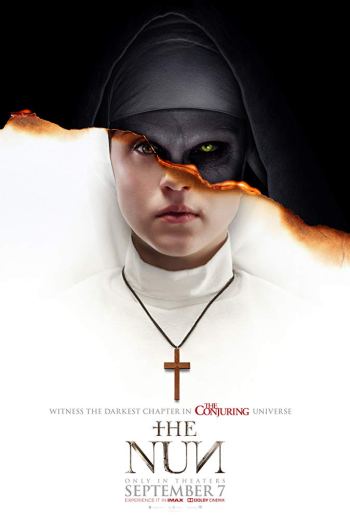 Making a horror film for the sake of it is a sure way to divide an audience. You’ll have those who aren’t particularly affected by jump-scares and are mostly in it for the way the story is told aesthetically and how the plot unfolds, and you have those who will flinch at the slightest sound. The Nun is the fifth movie in the Conjuring ‘universe’, as it is now known, situating itself as a spin-off to The Conjuring 2 directly and a general prequel to The Conjuring and the spin-off Annabelle movies. All four have proven quite popular, even breaking records in some parts of the world (the franchise itself is one of only three horror-based franchises to break $1 billion at the box office, after the Alien and Resident Evil franchises). But is The Nun a worthy addition to the universe, or is it just horror for horror’s sake?

In 1952 (twenty years before the events of The Conjuring 2) Father Burke (Bichir), an older priest, is sent by the Vatican to Romania to investigate the potential suicide of a nun at a very old abbey. First he must collect Sister Irene (Farmiga), a young nun working at a school who is yet to take her vows, as she is to go along with him. When they arrive they are met by French-Canadian expat Frenchie (Bloquet). It was Frenchie who discovered the nun hanging from the convent whilst making his deliveries. Upon reaching the abbey, Irene and Father Burke are offered lodgings until they can speak with the nuns the following day. Of course, things don’t go particularly well overnight, and as Irene and Father Burke proceed in their investigation, they discover an extremely powerful evil has long made its home at the abbey, and it will not go down without a fight.

Considering the high calibre of horror this year (A Quiet Place, Hereditary), it’s a tough time to be a horror film. Expectations are high, though the thirst for horror never lets up, so there is always room for more. The Nun is director Hardy’s second foray into feature-film territory, and second horror film, after 2015’s The Hallow (which he also wrote). Through The Nun, Hardy proves to have excellent skill as a director: his collaboration with DP Maxime Alexandre creates a beautifully gothic aesthetic that is sure to please horror fans, particularly those with a penchant for Hammer and/or classic Universal horrors. Many of the incredibly nuanced shots are reminiscent of any Dracula film (it’s perhaps no coincidence some of the film was actually shot in Transylvania), and the tone and costumes hark back to Friedkin’s The Exorcist. If ever there was a calling card for a director and their “vibe”, The Nun is just that for Hardy.

At the other end of the spectrum, the story itself is as weak as the cinematography, direction and performances (which we’ll get to shortly) are strong. It has its moments, but they are few and far between. The character of the Nun apparently proved popular and scary enough in The Conjuring 2 to warrant her own spin-off, but to provide more exposition on an antagonist can be detrimental to the story as a whole. The mystery that surrounds a villain is often what gives them their heft: to remove the mystery is to make them more grounded, more understandable. The less we know, the more terrifying they are. There’s nothing much scarier than the unknown. Take a film like Paranormal Activity (just the 2007 original). That film is utterly terrifying because, throughout, we know absolutely nothing about the evil presence. The entire movie is a lesson in how to horrify your audience, to build suspense and create fear out of fear itself. Of course, as the franchise progressed, much of this brilliantly built terror was lost as the demon became more and more understandable. The Nun provides almost everything we need to know about the demon that Ed and Lorraine Warren come across in the Conjuring movies, and it loses so much of what made it scary in The Conjuring 2. As a result, we’re left with a bland story that is no different to most ‘here’s a demon, here’s what it wants to do, let’s stop it and kill it’ storylines. There is nothing that sets it apart. Even the jump-scares are hardly that: there are one or two that are passable, but the rest (too many, really) just fall flat.

Taissa Farmiga (her older sister, Vera Farmiga, plays Lorraine in The Conjuring movies) has come a long way since her first appearance in television show American Horror Story back in 2011. Her performances have always been fair, but it’s plain to see how much she has developed since. She fully engages with her role as Sister Irene, making her a firmly believable character that the audience can invest in. She shines within a story that lacks and makes the most that she can of her at-times corny dialogue. Bichir as Father Burke is what gives the film that Friedkin feel, with his characterisation and costuming (mainly the hat, really) similar to that of Max von Sydow’s Father Merrin (perhaps there’s a link between Father Burke’s name and the character of Burke Dennings in The Exorcist? It’s a tenuous link, but…). Bichir supports Farmiga’s performance well, acting as the older and wiser yet open-minded religious devotee. Rounding out the threesome as Frenchie is Bloquet, who is endearing in his performance yet adds a subtle hint of mystery, as though we are supposed to suspect something about him. He balances this perfectly to never give anything away. Then there’s the now-infamous Bonnie Aarons as the titular Nun, reprising her performance from The Conjuring 2. Aarons’ physicality and appearance as the Nun is chilling, however the story almost entreats her to overdo her appearances, making the Nun less an unseen, frightening presence and more an over-done and expected shock, oxymoronically. Each actor does their utmost to provide a performance that will entice audiences and keep them hooked, but when the story enables you to easily zone out (particularly during the first act, after a fairly strong opening) and the dialogue doesn’t stimulate, it becomes very difficult. These very talented performers do their best, but it’s not enough to save the film.

Considering The Nun’s release date was pushed back in order to make the most of the Hallowe’en season, it seems it can quite confidently be placed on the list of ‘horrors for horror’s sake’. Ultimately, there was no real reason for this movie to exist on a canonical level for The Conjuring universe, however it gets a better rating and a recommendation thanks entirely to Hardy (otherwise this would have been a two-star-rated film). His direction and commitment to creating a pure gothic horror is keenly felt throughout, and it is worth seeing for this and the cinematography alone, which is at times sublime. The performances too are worth the watch. The Nun will not go down in the annals of greatest horror movies ever made, however thanks to Hardy it does have potential for cult status. He had been slated to write and direct a reboot of The Crow, a passion project he had been working on for some time, however this seems to have sadly taken a backseat, with Hardy no longer involved, which is a crying shame (if you ever get a chance to see his 2003 student short film Butterfly, it is highly recommended). He and his team of filmmakers and performers were worth more than what the story of this film could provide, and if anything it should make the name Corin Hardy one to watch out for in the future, with or without The Crow in his future.

One thought on “The Nun – Review”