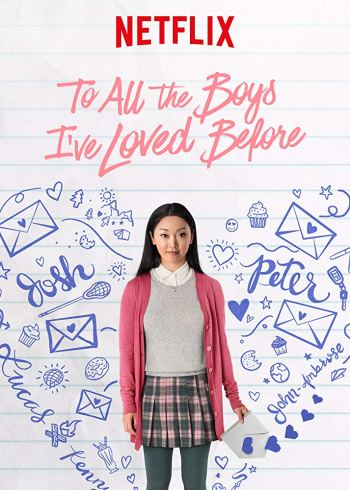 Young adult films have been all the rage for a long, long time. Before The Hunger Games and Twilight and Harry Potter we had the John Hughes movies of the 80s, and way before that we had James Dean running amok before his tragic and untimely end. But not often do we see a modern YA film that takes its cue from older YA’s and build on top of them. To All the Boys I’ve Loved Before is a teen rom-com that makes its influences very clear but also tries to do its own thing. So how does it stand up currently, with YA films generally starting to become lacklustre and, well, boring?

Sixteen-year-old Lara Jean Covey (Condor) and her two sisters, the younger Kitty (Cathcart) and older Margot (Parrish) reside with their widower father, Dan. Margot has been dating the Covey’s next door neighbour, and Lara Jean’s best friend, Josh (Broussard), for two years. She’s off to university in Scotland and so breaks up with Josh. This causes Lara Jean to reminisce on her friendship and past feelings for Josh, all of which she wrote down in a letter that she addressed to him but never sent. She had also written four other love letters, all addressed to boys she’d ‘loved’ in the past, but again had never sent. One day, all the letters find their way to the addressed boys. One letter was for a boy named Peter (Centineo), the first boy Lara Jean had ever kissed, and during a game of spin the bottle a couple of years ago, before he’d started dating her ex-best friend, Genevieve (Baranac). Gen recently broke up with Peter, and so Lara Jean and Peter concoct a plan to make Gen jealous and want Peter back and to convince Josh that Lara Jean does not have feelings for him anymore. Cue utter teenage chaos, where nothing is ever straight forward.

What’s initially striking in a positive way about To All the Boys is its cultural diversity. It likely stems from the author of the source novel, Jenny Han, an American-born author who is half Korean. It’s wonderfully refreshing to see the film fronted by an Asian-American girl rather than the ‘white washing’ that has happened in the past, even when source material clearly states the ethnicity of a character. It’s also a nod to modern relationships to have Lara Jean and her sisters be half Caucasian and half Korean, with their Eastern heritage playing its own role throughout the film rather than not being acknowledged at all: the girls’ Caucasian father tries to cook Korean food at one point, which is not only a way for the girls to remember their mother, who had passed away when the girls were younger, but to also keep in touch with half of their heritage. Countries such as America have such a diverse population that it’s only right that non-white cultures are being represented. The film is off to a positive start.

As previously mentioned, the film boasts many influences from older YA movies. In particular John Hughes films, which are not only reflected in the story itself, but also mentioned and paid homage to many times: Peter agrees to watch Sixteen Candles if Lara Jean will watch Fight Club; Lara Jean’s relationship with her single father is similar in closeness to that of Andie and her single father, Jack, in Pretty in Pink, and she kind of has to choose between two boys, just like Andie did; and then there’s a lovely father-daughter scene with Lara Jean and Dan in which they play ‘Everybody Wants to Rule the World’ by Tears for Fears, a band from the 80s, that gives it that nostalgic feel. The teen and high school setting is also very a-typical of a YA rom-com, but the plot in particular pays tribute to Gil Junger’s 1999 teen rite-of-passage film 10 Things I Hate About You, with those classic Shakespearean themes of deception and secrecy. However, director Susan Johnson, along with Han’s story, takes everything learnt from these older movies and creates something that pushes it into modern times, even trying to acknowledge that they’re learning from the mistakes of past filmmakers who were unaware or purely ignorant of how they represented certain things on screen. For instance, when Peter and Lara Jean are watching Sixteen Candles, Peter makes the point of saying the representation of character Long Duk Dong is racist, to which Lara Jean says it’s extremely racist. So the film is very much aware of itself and its audience, acknowledging the racism of past much loved movies, but it’s also saying that these films can still be watched and enjoyed for what they are, as long as it’s understood that misrepresentation and stereotypes are no longer acceptable.

The story itself is very sweet and heart-warming, if a little too optimistic and Disney-esque in its fantasy at times. Perhaps that’s a cynical and adult way of looking at it, but there’s a fine line between optimism and realism. Lara Jean often lives in the fantasy world of books, as many of us love to do, no matter our age. She, like many people, would love this fantasy to be realised, but the chances are slim. But rather than refusing to date because she doesn’t believe dating will live up to the standards of fiction, which would probably be the expected reason, she refuses because she doesn’t want to be hurt by someone leaving, in the same way she was hurt when her mother passed away, which is a sad but understandable reason. The fantasy of the film lies in the way everything seems to work out. Of course the journey is difficult and dramatic, otherwise there would be no story and no film, but (and not to give anything away here) even Lara Jean recognises that certain things turn out similar to her fantasies. That’s not to say this doesn’t happen sometimes in reality, but it’s not the most accurate representation of what most people, particularly teens who consider themselves invisible, go through. But then on the other hand, of course, this is what gives it that heart-warming and hopeful feel that does actually make it a joy to watch, cynicism fully aside.

Lana Condor is absolutely wonderful as Lara Jean. She makes it easy to cringe at Lara Jean’s humiliation when the letters are out there and her performance is so open that it pulls you in without any hesitation. It’s a no-brainer to root for Lara Jean and fully relate to a lot of her experiences. Corbett is just as endearing as ever as her father, and with Parrish and Cathcart rounding out the sisters with funny yet caring characters, together they create a realistic and emotional dynamic between the sisters themselves and with their father, a lovely and truthful representation of a modern family. Centineo is quite appealing as Peter, sure to make his way into the fantasies of teenage girls with access to Netflix, and Broussard as Josh is just about the same. Baranac makes for a good antagonist in the dislikable Gen, and Arthur as Lara Jean’s now-best friend Chris provides some light comedy at times (at one point she says she’ll be ‘Googling shirtless Justin Trudeau’ – how refreshing to choose the current Canadian Prime Minister over someone such as, say, Chris Hemsworth).

Many of us have been there: writing letters or notes expelling thoughts and feelings that we don’t have the courage to verbalise, with no real intention of sending said thoughts and feelings to the person they’re aimed at. It seems like a very teenage thing to do, but there are some things we never grow out of, and that’s what makes this film so much more than just for young adults. It’s highly enjoyable overall and there are a few lessons in there that even some adults can still learn from, even if it’s just re-learning what it’s like to be a teenager. You could even say it’s a teen version of something like 2011’s Crazy, Stupid, Love., where even adults who’ve been through a marriage are still trying to traverse the ups and downs and ins and outs of this insane thing humans have labelled as love, trying to convince ourselves of one thing when really we want what was right in front of us the entire time. It’s a subject that will always be a main theme in film, and it’s great to see it renewed and being used to diversify, even if the fantasy of it makes it feel a little unreal. We also only got to see three of the five outcomes of Lara Jean’s letters, though it looks like that’s just an opening for a sequel, perhaps for more of the same fantasy/reality line-crossing. But that’s all part of being a teen: most things are fantastical, until adult life hits. But, as Dan reminds Lara Jean, there’s no need for teens to worry about that just yet.

Dune (Part One) - ⭐️⭐️⭐️⭐️ - An excellently shot and designed adaptation of an incredibly dense novel that is sure to please many fans but possibly alienate some who are unfamiliar with Frank Herbert’s universe.
The Green Knight - ⭐️⭐️⭐️ - A safe adaptation of a centuries-old text that succeeds in bringing some fantasy into our lives but stops short of taking any risks in exploring certain themes.
Shang-Chi and the Legend of the Ten Rings - ⭐️⭐️⭐️⭐️ - A martial arts-heavy movie that works hard to balance action with story and successfully bring Asian-specific representation to the MCU.
The Suicide Squad - ⭐️⭐️⭐️ - A heroic try from James Gunn to insert something decent into the DCEU that boasts much of Gunn’s signature humour and characterisation but struggles with story and choice of characters.
Black Widow - ⭐️⭐️⭐️⭐️ - An overdue but excellently written, directed and performed solo movie for one of the MCU’s most popular and deserving characters, potentially giving Natasha Romanoff the swan song she deserves.
In the Heights - ⭐️⭐️⭐️⭐️ - A deeply thematic musical piece from Lin-Manuel Miranda, creator of Hamilton, that pulls you into a world of community struggles and relationships framed with excellently written songs and music that will salsa its way into your heart.