It seems to be that the movies can’t get enough of Benicio Del Toro and Josh Brolin at the moment. With the pair of them racking up credits in two of the biggest franchises – the MCU (both actors) and Star Wars (Del Toro) – of late, it must be fitting to bring them both back together for another crack at taking down some drug cartels on the US Mexico border. Though this time we don’t have the eye of Denis Villeneuve as director nor the moral compass of Emily Blunt’s Kate Macer from the first movie. So without two of the most important things that made 2015’s Sicario a success, is Sicario 2: Soldado successful in its own right in bringing Del Toro and Brolin back down to earth from their space adventures, or is it crash landings all around?

Set sometime not too long after the events of the first movie, Soldado picks up after a suicide bombing in a supermarket in Kansas City. On suspecting Mexican drug cartels of smuggling terrorists across the border into the US, the government sends CIA agent Matt Graver (Brolin) to start a war between the largest cartels in order to disrupt their deeds. Graver reunites with black operative Alejandro Gillick (Del Toro) in order to kidnap Isabel Reyes (Moner), the young daughter of the kingpin of one of the cartels, and make it look like the work of another cartel. As events unfold things become even less straightforward than in Soldado’s predecessor, and things start to get just that bit more personal for both Graver and Gillick.

From the off it’s fairly plain to see that director (and relative newcomer) Stefano Sollima wanted to have his own take on the crime-centric feature whilst paying tribute to Villeneuve. Without Blunt’s influential Macer to guide the audience through the often chalk-and-cheese personalities of Graver and Gillick, Sollima allows audiences to get to know the two men on their own levels without a means of escape. Likewise, Sollima’s direction leans more toward close ups than Villeneuve’s favoured long shots, as though getting closer to the characters physically will help us to understand them better. Having said that, now and again Sollima throws in an homage to Sicario, such as a top-down aerial shot following CIA vehicles as they drive along in a convoy that’s very aesthetically pleasing and well-choreographed, similar to a longer shot in Sicario. There was something about Sicario, though, that made audiences feel more a part of the movie, in that Villeneuve would often have us feeling that one minute we were eavesdropping on a conversation and the next we were very much a part of it. Sollima doesn’t create the same dynamic, keeping us generally at arm’s length despite closing in physically on his actors. Perhaps that was his intent, but Villeneuve’s methods were another aspect of the first movie that made it so successful.

Brolin and Del Toro are once again on top form. Despite Graver’s ability to be utterly career-focused and true to his principles, Brolin manages to portray an inner battle that rages within the character. This does come to some sort of a head for Graver eventually, and whether that’s a good or bad thing is likely to depend on each audience member’s feelings toward the character. This can be tough for audiences as most people like things to be relatively black and white, but in the Sicario world, truly nothing ever is. Del Toro takes us even deeper into Gillick’s head with his fantastic range, giving life to a backstory that is fleshed out more so than before. Although both actors do a sterling job it would likely not have been possible without returning screenwriter Taylor Sheridan, who has taken the characters as well as the story to another level. Special mention must also go to up and coming actress Isabela Moner. Proving that you don’t have to be well-experienced as an actor to be able to go the extra mile, Moner’s performance as Isabel Reyes is very reminiscent of hightly acclaimed Latina actresses (Moner is half Peruvian) such as Salma Hayek and Michelle Rodriguez. There must be something in the water in Hollywood at the moment, as Moner joins the ranks of many up-and-coming young actors and actresses that are making an early name for themselves. Certainly another one to keep an eye on in future endeavours.

There are moments within Soldado that are almost as shocking as those in Sicario. Its sense of jeopardy is there, but it doesn’t feel quite like there is as much at stake. As a result, it becomes almost predictable. It’s fair to say that its political commentary is quite appropriate for the current climate in the United States (perhaps enough to even get some people’s backs up), but that doesn’t necessarily help the overall story. Perhaps it’s because we’re now pretty familiar with the characters, so much so that their actions aren’t surprising, or perhaps it’s because we have already come to expect the unexpected from them. Either way the movie leaves itself very much wide open for a third instalment that could potentially land itself in the ‘predictable’ category. The story itself looks to be fairly obvious as to where it will lead, however depending on the director who will ultimately direct a posisble third, the characters of Gillick and Graver (if either of them are to return) will need a breath of fresh air to keep them from becoming too predictable. Gillick’s newfound depth could lead to new aspects of his character being revealed, and more story on Graver’s side could lend to a more interesting dynamic between the two, or whatever characters (whether old or new) they may encounter.

The title of the film has a few variations, depending on where you are in the world (Soldado, Sicario 2, Sicario: Day of the Soldado), but what it should really be thought of as is a spin-off of Sicario rather than a direct sequel (Soldado: The Adventures of Matty and Ally might have been more fitting). Whilst the movie as a whole retains its feelings of peril and indecision regarding ethical conundrums from the first, it is a step down from the Villeneuve-directed and Blunt-starring first film. It’s still a strong film, entertaining and robust, it just doesn’t quite have the panache of its parent movie. A third would be very much welcome, as long as it can take audiences somewhere unexpected. Except space. Del Toro and Brolin need a break from that for now, and we do too.

This movie also boasts one of the coolest alternative posters in a long, long time… 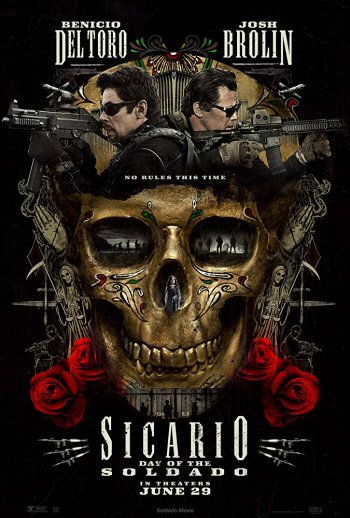