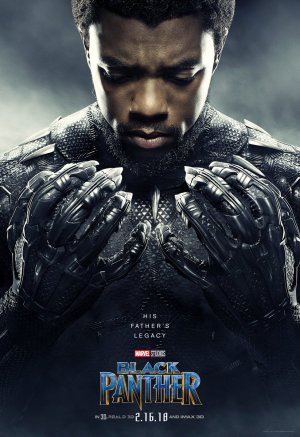 Marvel’s most diverse, and possibly finest, film to date, Black Panther has the Disney-owned giant of film and comics’ first almost all-black cast that also includes a very agreeable amount of female actors. Although Marvel’s pleasing step in the right direction towards diversity and equality has satisfied many people, does the movie actually hold up its ideals (and more) that are based in reality, or is it just pulling a DC and trying to please the masses without any actual substance?

It almost feels like a sin to have written that last sentence. Marvel have proven time and again that their movies, despite being ultimate crowd-pleasers and unbelievable money-makers, for the most part have the substance that keep their superhero-based films some of the most watched/bought/paid for/illegally downloaded movies of all time. Black Panther is no exception. After the events of Captain America: Civil War, Prince T’Challa inherits the throne of Wakanda, an African city hidden away from the rest of the world. Their secrecy is due to keeping others from discovering a substance that keeps Wakanda ahead of the rest of the world in technological advancement – vibranium, the strongest (fictional) metal in the world (Captain America’s shield is also made out of vibranium). T’Challa’s inheritance doesn’t come without challenge, both from within Wakanda and without. The threat to his kingship also becomes a threat to the world, one he must fight without revealing Wakanda’s secret.

Director Ryan Coogler did his research for his first foray into the MCU (Marvel Cinematic Universe). Really did his research. He took himself and his family on a trip to Africa to really get to grips not only with the culture, but with his own heritage. This shines through every second of Black Panther. The blend of modern African-American culture with indigenous and historical African culture is seamless. It’s a credit to the studio and the filmmakers that they could finally take the direction of hiring people who are from (or descended from) the cultures and ethnicities in the film to really give it that authenticity that audiences will certainly recognise. It draws us into something brand new, which for Marvel is unprecedented – just when you thought they’d done it all and couldn’t present something any more original or different (Deadpool is probably the most ‘out there’ Marvel have been thus far), out pops Black Panther. From the production design to the artwork, the music to the African-based choreography, the entire film has been lovingly created in such detail that it would certainly take a few more viewings to be able to really take it all in.

It’s a struggle to recall any character that was either unlikable or underperformed. T’Challa is a strong character that rivals any other Marvel protagonist. He is arguably their best adapted-for-film character to date. Boseman delivers an understated yet solid performance as Wakanda’s leader, and there’s something about his voice and accent that is soothing yet commanding. Perfect leader material. He is supported mostly by his sister and tech designer Shuri (Wright), head bodyguard Okoye (Gurira) and ex-girlfriend Nakira (Nyong’o), three strong and fearless females who are loyal not only to T’Challa but to Wakanda. All three are just as unique in their traits as T’Challa: Shuri provides expertly-timed comic lines (Wright often almost outshines Boseman in scenes they appear in together) whilst using her strengths as an inventor to show she is more than just another Disney princess (technically); Okoye exhibits physical skills beyond that of your average bodyguard, and as the leader of an all-female battalion of protectors she demonstrates her unwavering almost-to-a-fault loyalty endlessly; and Nakira’s affection for T’Challa still shows through her inability to leave him in his ultimate times of need whilst retaining her own sense of self. Together these characters and the actors behind them create a force that is not to be reckoned with, in Black Panther or any future Marvel film.

If there’s just one drawback, it is, as always, Martin Freeman’s attempt at an American accent. The character of Everett Ross is a decent one and he slots in well with his African contemporaries, however Freeman’s delivery of Ross’s dialogue can, at times, be rather off-putting. Thankfully Andy Serkis’ effort at a South African accent, as the villainous Ulysses Klaue, fairs much better, as does the character in general – a little psychotic, a little humourous, he’s decent enough as a pure scoundrel, though not quite as high on the villain scale as Michael B. Jordan’s Erik “Killmonger” Stevens. Whatever it is that Klaue is selling, Stevens wants it, along with the destruction of Wakanda. Jordan’s performance is a decent one, though he is always only second fiddle when in screen-competition with Boseman.

For most Marvel heroes, the road to hell is paved with good intentions, which gives them the depth and longevity that keeps us re-watching most of their movies. Black Panther is a little different. The film has a purity that other Marvel films lack, a purity that shall likely be the reason people will continue to revisit it for many years to come. Perhaps it’s because Wakanda is so cut off from the rest of the world that the real atrocities suffered in other societies hasn’t reached it – it’s a place so advanced in science and technology but perhaps so naive in other ways. Whatever the answer, there are many implications that this might not be so for much longer, with T’Challa having mixed with the Avengers. Black Panther has rejuvenated the MCU (not that it really needed it, but it got it anyway) and has ignited an excitement for a sequel. It has also, for some, reignited an excitement for the next instalment (Avengers: Infinity War, out in April). Whether the MCU continues to succeed from here on out or starts an inevitable decline, Black Panther is certain to be one Marvel movie that will always stand out amongst the rest, particularly when it comes to breaking conventions and allowing everyone to see themselves as a superhero. As they say in Wakanda: “Wakanda forever”.

Parasite (기생충) - ⭐️⭐️⭐️⭐️⭐️ - Another excellent picture from South Korean filmmaker Bong Joon-ho, Parasite is breaking new ground in the film industry, with its recognition at film festivals and award ceremonies all over the world, as well as bringing to light many themes surrounding social classes that are brought to life by excellent performances. 🏠 Full review at dawnofthetapes.com - LINK IN BIO 📝 #film #movie #review #parasite #bongjoonho #songkangho #choiwoosik #choyeojeong #parksodam #janghyejin #leesunkyun #parkseojoon #기생충 #봉준호 #송강호 #최우식 #조여정 #박소담 #장혜진 #이선균 #박서준
Bombshell - ⭐️⭐️⭐️⭐️ - While not the most perfect film, Bombshell does what it needs to do in shedding light on the experiences of women who suffer sexual harassment in the workplace, using a true rather than fictional story to help drive home the reality of being a woman in a “man’s” world. 🙅🏼‍♀️ Full review at dawnofthetapes.com 📝 #film #movie #review #bombshell #jayroach #charlizetheron #nicolekidman #margotrobbie #johnlithgow #megynkelly #gretchencarlson
1917 - ⭐️⭐️⭐️⭐️⭐️ - As far as war movies go, 1917 is up there with the best of them in depicting the futility and the bravery of the men who risked or laid down their lives in WW1, a stark reminder of those still putting their lives on the line today. 🇬🇧 Full review at dawnofthetapes.com 📝 #film #movie #review #1917 #1917movie #sammendes #deancharleschapman #georgemackay #colinfirth #andrewscott #benedictcumberbatch
The Academy Awards 2020 Nominees & Winners - a roundup of this years nominees for Oscars. 🏆 Full article at dawnofthetapes.com 📝 #films #movies #oscars #theoscars #academyawards #theacademyawards #1917 #sammendes #fordvferrari #lemans66 #jamesmangold #onceuponatimeinhollywood #quentintarantino #marriagestory #noahbaumbach #littlewomen #gretagerwig #parasite #bongjoonho #기생충 #봉준호 #jojorabbit #taikawaititi #joker #toddphillips #theirishman #martinscorsese
The Gentlemen - ⭐️⭐️⭐️⭐️ - Guy Ritchie gets back to what he does best (not magic carpets) and delivers a crime caper that has spots of differences to his previous similar movies to keep it fresh, though he lets himself down at times by still allowing some questionable race comments slide in, something he now needs to step away from in his crime-genre movies. 🍺 Full review at dawnofthetapes.com 📝 #film #review #movie #thegentlemen #guyritchie #matthewmcconaughey #charliehunnam #michelledockery #hughgrant #colinfarrell #henrygolding
Cats - ⭐️ - In a fine example of when ideas go wrong, Cats is not the vision it could have been had it been executed through a different and more digestible medium, such as animation or 100% digitised. There were few elements with potential for success, but ultimately let down by poor (and downright scary) visuals. 🐱 Full review at dawnofthetapes.com 🎬 #film #movies #review #cats #catsmovie #tomhooper #francescahayward #idriselba #judidench #ianmckellen #taylorswift #rebelwilson #jasonderulo