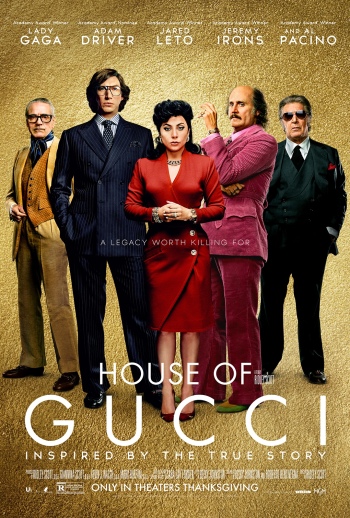 The name ‘Gucci’ is synonymous with luxury, extravagance and flair. But behind the glamour, couture and high-end products is a dark story often relegated to the history books and swept under the gold-trimmed carpet, a story that has always been poised for a Hollywood movie. One can’t help but wonder if the founder of the fashion house, Guccio Gucci, could have ever imagined the conflicts that would arise amongst his descendants, eventually leading to no Gucci being involved in the brand. Of course, we have the whole ‘based on a true story’ disclaimer, but just how dramatic was the meteoric rise and calamitous fall of the Guccis, and has Ridley Scott made a decent film out of it?

Patrizia Reggiani (Lady Gaga) is a beautiful young woman working for her father’s transportation business in 1978 when she meets Maurizio Gucci (Driver), a law student and heir to the Gucci empire, at a party. They begin dating, and eventually Maurizio introduces Patrizia to his widower father, Rodolfo Gucci (Irons). Rodolfo does not approve of the relationship and cuts off his son, citing that Patrizia is only after the Gucci money. Maurizio gives up his birth right and marries Patrizia. As time goes on, Patrizia gets more and more involved with the brand, pushing Maurizio to be more forthright and more of a presence in the business, sometimes putting herself in the driver’s seat. Eventually, things start to get so heated between Maurizio and Patrizia and other members of the Gucci family that betrayals and criminal activities start to become the norm, marking the beginning of the end for the once lustrous family.

Much of Scott’s direction favours Gaga over Driver – most of the movie is from Patrizia’s perspective. If you don’t know the history of what went down with Patrizia and Maurizio, then the following will be a bit of a spoiler, but knowing that Patrizia was the ringleader in Maurizio’s murder, at no point do we pity her. Sure, their love story starts off as any does, but her constant prodding and pushing of Maurizio causes her own demise, and as a murder conspirator there’s little pity to be had for her, which is what makes much of this movie work. What really felt like the downfall of the film was that at times it felt like one big parody, which comes off as insensitive as well as out of place. In particular, the character of Maurizio’s cousin, Paolo Gucci (Leto), was very clownish throughout. Perhaps he was indeed eccentric and something of a black sheep in the family, but the character felt overdone rather than just the family’s laughing stock. Similarly, a scene with Patrizia and her psychic friend Pina (Hayek) was very comical, and while this could serve well to view Patrizia as the deranged woman she had become, it also felt out of place in this film as a whole. It’s been said that Robert DeNiro was set to play Rodolfo originally, thus indeed making some kind of Italian mafia-Godfather parody, and this would likely have taken this movie down that route even further. I for one am glad Irons took on the role, if only to keep things from getting too parodical.

It stands to reason that surviving members of the Gucci dynasty weren’t too pleased with a film adaptation of their family’s infamous sordid history, but infamous sordid histories are to Hollywood as drugs are to dealers. Fortunately for Scott, the current CEO of Gucci was more than happy to allow the writers and filmmakers to scour the archives for props and costumes and, one would think, historical details. Thus, while we could take some aspects of the movie with a pinch of salt, for the most part writers Johnston and Bentivegna likely stayed fairly true to reality – stranger than fiction at times, right? The costume department must have been in their element. Between that and the set design/locations, the sense of rags-to-riches for Patrizia is keenly felt (although judging by her wardrobe at the beginning of the movie, she always had expensive taste), however the luxury that surrounds the Guccis is seen as completely normal for them. At no point is there a moment of great wonder for anyone but Patrizia when it comes to the mansions and penthouses and wardrobes that she gets to play in. It certainly adds to the development of Patrizia as a character and the ease in which she falls into the world of Gucci.

Following on from that, Lady Gaga was a good choice for Patrizia. She has the look, the Italian (albeit Italian-American) ethnicity and background, and she worked hard methodically to provide a solid Italian accent. Gaga has said she did not consult with the real Patrizia Reggiani due to her being a criminal and not wanting the association, but Gaga committed herself to the film’s character of Patrizia and successfully took us on her journey. Driver was a great Maurizio Gucci, however the character overall felt flat much of the time. His own journey from a nice young man to a hardened businessman was quite a leap, and more time could have been spent on that turn in his mentality that ended up distancing him from Patrizia. Pacino was really quite enjoyable as Maurizio’s uncle and Rodolfo’s brother Aldo Gucci, with his full acting range on show, particularly in the third act. Leto too was enjoyable and provided a great performance as Paolo (son of Aldo), even if the character did feel too farcical much of the time (I also enjoyed the irony of Leto being a spokesmodel for Gucci in reality). Leto and Pacino together made a strange father-son relationship appear emotional and true. Irons made for a good Rodolfo and I’d like to say he was probably better cast than DeNiro would have been, as his physical presence feels less mafia-like, particularly in a movie also starring Pacino. Hayek’s performance as Pina was a good interlude at times, taking both Patrizia and the audience away from the drama at times, but again the character felt like she was used as some comic relief.

House of Gucci doesn’t bring much new to the table in terms of what we know-but-don’t-know goes on behind the closed doors of the rich and famous, but it does make for an entertaining drama. Yes, the comedy and what could be perceived as parody felt out of place, but it was still good for a laugh that somewhat lightens the drama. Sometimes it’s good to be reminded that those who live incredibly different and affluent lives aren’t always how they are perceived in the public eye. Privately, their lives can sometimes be worse than ours. That’s not to say that Scott is trying to make us pity them, but rather understand that money truly can be the downfall of even the straightest of people with the best intentions. Even then, I don’t think we know even now if Patrizia was only after money in the first place. Perhaps some things are best left unsaid.