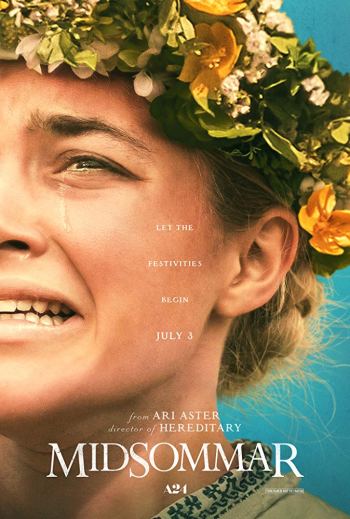 It’s probably safe to say that it takes a lot to shock anyone when it comes to movies these days. High levels of gore and violence, explicit nude scenes, language that would once have had your gran threatening to wash mouths out with soap and much more is now rather par for the course. Thanks to the (arguably) visionary works of many filmmakers, we’re perhaps in danger of becoming numb to seeing and hearing things that we’d normally consider out of the ordinary in everyday life. Ari Aster is one such filmmaker, moving swiftly on from Hereditary to give his audience something that isn’t too far removed from his 2018 critical and commercial, if opinion-dividing, hit. Could Midsommar go the same way, or is it just too “out there”, even for a twenty-first century audience? And would it be such a bad thing if it were?

Dani (Pugh) is a young college student whose life is full of turmoil, with her anxiety threatening to derail her relationship with fellow student Christian (Reynor). When her life is suddenly thrown into even more chaos, she relies on Christian and their dissolving relationship more than ever, much to the annoyance of his friends. A few months down the line, Christian and his friends Josh (Harper) and Mark (Poulter) are invited to visit a small commune in rural Sweden by their friend Pelle (Blomgren) who hails from the commune. Christian also invites Dani to come along, again to the exasperation of his friends. When there, they find that they are to experience a midsummer celebration that occurs in the commune once every ninety years. As Dani, Christian et al come to discover, not all is as innocent and quaint as it first appears, with their presence perhaps being more meaningful than they’ve been led to believe.

If you’ve seen Hereditary (which is highly recommended before seeing Midsommar, as it will help to prepare you) then you ought to have an inkling as to what is instore in Midsommar. Aster does not hold back in his second feature-length film, taking things to a whole new level, and in a timelier manner than Hereditary. Aspects of it may seem a bit much for some moviegoers to take (this was the first time I’d seen someone leave a movie, and only about forty minutes in, which is not even half way through), but you can’t say you’re not warned when the 18 certificate from the BBFC pops up pre-movie along with a warning of gore. In some ways, the graphic nature of some scenes is not all that new to us, however the framing of said scenes and the unabashed way in which Aster forces us to see pretty much what the characters see does make us remember that, although we’ve seen it before, perhaps we’re not quite numb to it all yet.

As horror goes, it’s a credit to Aster and his team, particularly his cast, that we can even still be shocked. This isn’t necessarily all down to the visuals (although they are a huge part of it), it’s also Aster’s story; he was given a chance to do a movie based around a fictional cult, but he injected his own personal experiences with a break up in order to give some depth to the characters and the story, rather than just being an out-and-out horror (an area where many filmmakers go wrong – a lack of depth). There does seem to be kind of a disconnect with the personal story of the lead characters and the later events, however it’s one of those where you just need to sit and have a think (and maybe a strong drink) afterwards in order to piece it together for yourself. Aster works in an oft abstract way, and it’s this that could either turn audiences on or off. If you head into the movie with the right mindset (I repeat: watch Hereditary) then you will be more likely to get your head around it all. Or most of it. You might even find something you can relate to, but it that will depend on how your mind works.

Considering the extreme content of some sections of the film, it would have been quite a process for the actors, who surely would have had counsellors on hand if needed. But they do create a whole new meaning to the word ‘committed’. Pugh is yet to really put a foot wrong in her career, selecting excellent projects and roles that suit her versatility down to the ground. Her performance as Dani is no exception: she holds the movie together even as Dani struggles to hold her own mind together, reaching from the depths of despair up to the drug-addled highs and everything in between. Reynor’s Christian isn’t quite such a demanding character, however Christian’s experience differs in many ways to Dani’s, and Reynor too goes through the mill in his performance, particularly in the third act. His face can be hard to read at times, and as an audience we could have used more diverse expressions from him, but overall, he does a damn good job with tough material. The supporting cast and extras are there to serve mainly as the waves that push Dani and Christian towards crazyland, but what they had to portray was probably no less difficult and impressive in delivery (even if that may have meant keeping a straight face at times) than the main cast. Aster’s direction made it easy for his cast, and by proxy his audience, to feel crowded and cared for yet isolated and targeted. The ensemble has just as much meaning as individuals and helps create an intense and at times terrifying atmosphere.

Aster and his movies are not going to be for everyone. Although he’s only made the two, they are full-on and controversial. But for some audiences, this is what we need. For the horror enthusiasts, the lovers of an abstract plot and/or visuals and even general cinephiles, we need this kind of cinema in order to keep things fresh so it’s not all Disney and rom coms and poorly constructed, cheap “horrors”. Some will want Aster to keep going, push the boat as far as he can (within reason – or would even that be too constrictive?) and keep making the movies he wants to make, which is pretty much what any creative learns from the off: make what YOU want to see. And of course, there will be some who will walk out of or ignore his movies completely. Aster’s movies are not the most “out there” that have ever been, and nor will they be the least, but as long as Aster keeps making movies with passion (and making epic casting choices), there will always be an audience.

One thought on “Midsommar – Review”