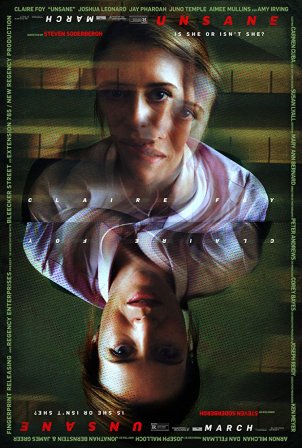 Despite ‘retiring’ in 2013, Steven Soderbergh’s directorial career seems to be coming back with a vengeance. Starting with last year’s Logan Lucky, he has now brought us Unsane, his first horror/thriller. Starring The Crown’s Claire Foy and shot entirely on an iPhone 7 model, Soderbergh is certainly taking his comeback in unusual directions. Logan Lucky fared rather well, luckily for Soderbergh, but does Unsane continue this trend, or should he return to his retirement?

The story follows a young businesswoman named Sawyer (Foy) who has recently moved to a new city two years after falling victim to an obsessed stalker (Leonard). During a one-night stand, Sawyer suffers a breakdown and decides to seek help from a support group. After a one-on-one consultation, she unwittingly commits herself to 24-hours in the institution, which then stretches to seven days, all the while convinced her stalker has been employed at the facility under a false identity. Sawyer sets out to prove not only that the employee is her stalker, but that she is completely sane.

With all the handheld-style of filmmaking that has been going on since around the turn of the century, shooting something so intimately isn’t anything new. Shooting a film on an iPhone and giving it a wide release, however, is unprecedented, but it’s not something necessarily worth getting excited about. Unsane is certainly shot (by Soderbergh himself, under the pseudonym of Peter Andrews) and directed rather well for something made with such limited technology, but let’s not forget its $1.2million budget, the name ‘Soderbergh’ and the perks that come with both. The editing and ‘shopping on it in post quite likely had a big hand in making the film look as good as it did, along with fairly minimal but trippy soundscapes. The iPhone idea might be gimmicky, certainly for a production that could have asked for more, but this is not reminiscent of a student film, not with Soderbergh at the helm. The minimal scale that an iPhone 7’s camera affords gives the film that claustrophobic tension, and the framing often provides familiar shots that are often used to convey insanity or the falling into, such as the vague use of a fish-eye lens. So the iPhone idea works, but let’s not be fooled by how that sounds and expect that everyone can now go ahead and make a film that’s going to look as good. As long as the content is there, a film can be shot using just about anything.

But is Unsane’s content, its story, actually any good? Jonathan Bernstein and James Greer’s screenplay does leave a lot to be desired. The first half builds well, following Sawyer as she goes from believing she is completely fine in the head to being unsure herself as to what is real. We’re pulled in with Sawyer, not knowing what’s real and what’s not, not knowing if we can trust her perspective. But she very quickly decides she is not ill in the head and everything she’s seeing is real and created by her stalker to fool everyone else around her. It’s after the midway point when we start to see the story from other perspectives rather than Sawyer’s that the premise starts to unravel. It still has its moments, with the more gruesome events that occur providing a bit of relief from the muddying storyline, but, unlike Sawyer, the plot starts to lose itself when it should be holding itself together to keep the audience interested. It’s easy to go into this film expecting one thing, but then something entirely different happens. The unexpected route is always welcome in a film, but only if it’s worth the payoff. In the case of Unsane, it wasn’t really worth it.

Other than the interest surrounding the physical filmmaking aspects of the movie, the only other good reason to see this film is the performances. Claire Foy’s complete one-eighty turn from playing Queen Elizabeth II with a proper Queen’s English accent to an eccentric American with a fairly good accent unequivocally proves that she is an actor worth her salt. Despite dialogue that ranges from rather good to rather corny, Foy works with what she’s given and she works it well. Performing for a camera that is smaller than your head is probably quite unusual for an actor of her experience, and could perhaps in a way be more distracting than having a great hulking thing staring you in the face, but her performance is unhindered, at once convincing and perfectly deranged for a character that is supposedly sane. The same goes for her co-star Joshua Leonard, the is-he-isn’t-he stalker, going a long way (at least initially) in playing with audience’s heads and not knowing who they should believe. Other supporting performances are decent enough, with SNL’s Jay Pharoah’s comic relief placed well in order to relieve some of the tension felt both by the character of Sawyer and the audience (even if his role is a little ambiguous and revealed to be a fairly random addition to the inmates), and Amy Irving as Sawyer’s strong-willed and loving-to-a-fault mother. Juno Temple also continues her varied career with an interesting choice as one of the institution’s craziest inmates, giving a performance that outdoes a lot of her previous work.

Overall, Unsane is a bit of a mixed bag. If it weren’t for the hype surrounding the way it was filmed and the fact Soderbergh was shooting and directing, it may not have received quite the attention it has, nor the more favourable reviewing in general. Both Soderbergh and the iPhone deserve their due in this – the film is visually enticing and holds the attention of the audience where the dialogue and story is unable to. The is-she-isn’t-she aspect wasn’t played out as well as it could have been and gave it all up a little too easily. It was perhaps not quite worthy of having Soderbergh onboard, but had it not it would probably be placed much further down the list of watchable horror/thrillers in recent years. It would be good to see Soderbergh take on another film of such a genre, but one that’s more his calibre. Foy was also perfect casting for this role, again taking the film to heights it may not have otherwise reached. With a little more work on the second half of the screenplay it might have fared better, and, like its protagonist, Unsane isn’t a total lost cause, but Bernstein and Greer could have messed with our heads more to create a more fulfilling end.