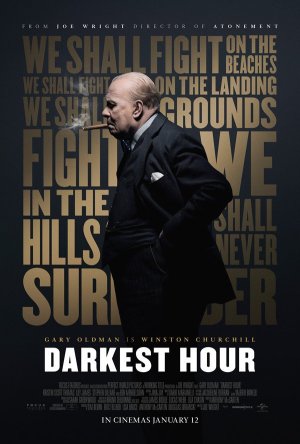 On May 10th 1940 Winston Churchill was appointed Prime Minister of the United Kingdom. He led the country through the remainder of the Second World War, resulting in victory, and became one of the most famous Britons in history. His first month in office, however, was a far from easy transition. Darkest Hour recounts those first weeks during the month of May, covering some of the tough decisions he faced in the lead up to his famous “We shall fight on the beaches” speech. Presented more as a snapshot of a larger biopic than a full-on political drama, Joe Wright’s film focuses very much on Churchill himself rather than overdoing it with wartime action. But is it just another version of the same historical account we’ve heard many times before?

There have been many, many film and television portrayals of Winston Churchill, the most recent being Brian Cox in Churchill (a lauded performance) and John Lithgow in The Crown (not a bad turn for an American playing a Brit). And now we have arguably one of Britain’s finest actors in a role that could be career-defining. Gary Oldman may not initially appear as someone a director would think of immediately for the role of Churchill, but as many filmmakers (and audiences) in this day and age know, anything is possible with the right make up and prosthetics. Put this together with Oldman’s pure talent and director Joe Wright’s vision and you will see and hear no one but Churchill on-screen. The film has been described by many as pure Oscar-bait, some saying it isn’t entirely worthy. Beg to differ. Oldman’s performance is truly worthy of his Academy Award nomination and Golden Globe win, just as the overall film is also worthy of its own Academy Award nomination. Churchill is often portrayed as a burly gruff man without many other traits. Between Oldman’s performance and Anthony McCarten’s screenplay Churchill has become a more well-rounded character as we get to see him on a more personal and intimate level: his sense of humour and righteousness could be either endearing or off-putting, but that could be said of any real human being.

Supporting Oldman’s Churchill is Kristen Scott-Thomas’ Clementine, Churchill’s wife. She is the sort of woman one can imagine the old adage “behind every man is a strong woman” was based on. Scott-Thomas provides a lovely portrayal of Churchill’s confidant and fiercest supporter. It would have been good to see a little more of her and the influence she had on her husband. However as the film is mostly seen through the eyes of Churchill and depicting, in a way, how lonely making huge decisions that affect a country at war can be, despite the support offered, it can be forgiven that Clementine takes a back seat in this film. Instead, taking a more forefront approach in Clementine’s stead, Churchill’s assistant Elizabeth (James) steps in as another advisor to Churchill, albeit unintentionally. Elizabeth is a stoic character, perhaps unaware of the magnitude of the political situation at first, but she quickly catches on, and in this way she is often used as a conduit between the audience and Churchill. James is perhaps not best suited to this role; more of a character actress, the feeling that she almost wants to jump out of Elizabeth’s skin into a theatrical role is apparent throughout, which is rather distracting. A more understated actress, able to portray a quiet knowing whilst maintaining a presence, might have been more suitable. It’s also at times hard to tell if James is attempting some semblance of a cockney accent or purely attempting to tone down her Standard English. The same could not be said for Mendohlson’s turn as King George VI. His performance as the stuttering monarch, whilst not a stand-out, is imposing and memorable, almost giving Colin Firth a run for his money.

Outside the performances, the cinematography is very noteworthy. The experimental angles and long takes are a testament not only to the eye of DP Bruno Delbonnel, but also to Oldman’s performance – for takes that long with no cuts further demonstrates his aptitude as an actor. Along with a prominent score by Dario Marianelli that at times perfectly reflects the inner mind of Churchill, even in his more contemplative moments, the film provides its audience with different levels from which it can be perceived.  All together this is what gives the film that extra boost from being just another Churchill piece to a multi-layered exploration of the man.

There is one scene that is quickly becoming highly infamous. On his way to Westminster in a private car, Churchill, whilst trying to decide whether to proceed with peace negotiations or to continue to wage war on Nazi Germany, jumps out of the car and heads to the Tube. Whilst travelling his one stop over he engages with the public and straight up asks them what they would do in his situation. The idea is novel, however the execution is rather cringeworthy. It’s clear to see why audiences (critics in particular) have a problem with this scene. On the one hand, yes, it’s clearly not the most well-written way to imagine how Churchill made his decision to never surrender (according to sources, he often disappeared from Parliament and went wandering the streets of London, talking to the public to get their view), however as this scene is purely fictional, it could be argued that it can be seen as a dream-like sequence, with Churchill imagining himself on the tube discussing the issue with civilians. It’s perhaps a stretch, but with the rest of the film being a real achievement in filmmaking, it could maybe afford one slip up.

From a personal perspective, I initially had no real intention of seeing this film. Usually war-related dramas do not peak my interest, partly because there are so many and it’s easy to become overwhelmed by them, and partly because they can be incredibly boring in a number of ways. But after hearing a lot of praise for Oldman and the film as a whole, I decided to give it a chance, and I am so glad I did. In doing so I came to realise that perhaps the film will not be for everyone, particularly those that do like to indulge in a good wartime film, but I do think Darkest Hour is the perfect film to introduce younger audiences to this kind of genre and keep alive an important part of world history. Oldman is engaging, the dialogue is understandable (no overly verbose monologues) and the visuals are interesting enough to retain the focus of a brain that is perhaps used to jumping from one thing to the next very quickly. Despite knowing the ultimate outcome, there is still an exciting sense of going on this short journey with Churchill and then feeling those goosebumps when Oldman delivers the famous speech. Darkest Hour is truly a victory in cinema.

One thought on “Darkest Hour – Review”

Fantasy Island - ⭐️⭐️ - with very few redeeming features, this feature film reboot of the television show from the 70s lacks in most areas, including story and dialogue, resulting in something messy and, frankly, boring. ☠️ Full review at dawnofthetapes.com - LINK IN BIO 📝 #film #movie #review #fantasyisland #jeffwadlow #michaelpena #maggieq #lucyhale #austinstowell #jimmyoyang #ryanhansen #portiadoubleday #michaelrooker #blumhouse
Onward - ⭐️⭐️⭐️⭐️ - A heartwarming movie that deals with strong themes sensitively and carefully while retaining a lot of fun and entertainment, making it the perfect package for audiences of all ages, particularly those who may be able to relate to its subject matter. 🧙🏻 Full review at dawnofthetapes.com 📝 #film #movie #review #onward #danscanlon #tomholland #chrispratt #julialouisdreyfus #octaviaspencer #disney #pixar
The Invisible Man - ⭐️⭐️⭐️⭐️ - As horror movies go, writer/director Leigh Whannell has succeeded where many before him have not, in creating something that is successfully scary, suspenseful and thrilling without using obvious horror movie tropes, and by coming at this reboot from a fresh angle but retaining the important points of the original story. 😱 Full review at dawnofthetapes.com 📝 #film #movie #review #theinvisibleman #leighwhannell #elisabethmoss #oliverjacksoncohen #horror #hgwells
Emma. - ⭐️⭐️⭐️ - While it’s a classic Austen novel, the story of Emma has become somewhat redundant, and this latest adaptation does its best to entertain at some points but struggles overall to find its groove and be in any way relatable to modern audiences. 💖 Full review at dawnofthetapes.com 📝 #film #movie #review #Emma #autumndewilde #anyataylorjoy #johnnyflynn #miagoth #billnighy #mirandahart #janeausten
What’s On - March 2020 - a roundup of releases over the coming month. 🎬 Full article at dawnofthetapes.com 📝 #films #movies #thepaintedbird #misbehaviour #mulan #onward #aquietplace2 #vivarium
Birds of Prey - ⭐️⭐️⭐️ - The breakout star of Suicide Squad gets her own movie, but she’s not necessarily the best thing about it. Despite a lacking storyline and some weak characterisation, there’s plenty of action and humour to enjoy, with the hope that this movie will be a jumping-off point for more women of the DCEU. 💎 Full review at dawnofthetapes.com 📝 #film #movie #review #birdsofprey #birdsofpreyandthefantabulousemancipationofoneharleyquinn #cathyyan #margotrobbie #jurneesmollettbell #rosieperez #maryelizabethwinstead #ellajaybasco #ewanmcgregor #aliwong #harleyquinn #dceu #huntress #blackcanary